A Bit About Horses, Guest Blog from Jude Knight + Release of “A Raging Madness” + a Giveaway

Today, I welcome my internet friend, Jude Knight, with a bit about her research on horses and the latest release in The Golden Redepennings series, plus a GIVEAWAY.

My qualifications for writing about horses are ten years as a Riding for the Disabled mum, five as a Pony Club mum, and seven as the reluctant care-taker of one or more obstreporous ponies.

Yet I write Regencies, and in Regency times, gentlemen were as obsessed with their horses as today’s men are with their cars or motorbikes. In fact, in two of my books, including the latest release, the hero breeds horses for sale.

Which meant I had a lot to learn. I knew the smell of wet pony, and the tricks it can get up to when it doesn’t want the bridle and saddle. That was a start. Many blog posts, library books, video clips, websites, and questions to friends later, I still think that one end bites and the other kicks. But I’m slightly more confident about sending my horse-mad heroes out into the wide world.

In The Bluestocking and the Barbarian, Lord Sutton breeds Turkmen horses he and his family have brought from their home in the Kopet Dag mountains. Lord Sutton’s Turkmens, a predecessor of today’s Ahkal Teke, arrived in England well after the heyday of what they then called the orientals, or hot bloods. Finer boned, thinner skinned, faster, and more spirited than the European horses (known as cold bloods), the imports from Turkey, Persia, and middle Asia fascinated the English of the seventeenth and eighteenth centuries.

If you wanted to sell, or to buy, a horse, you might go to a local horse fair. Or, if you lived in London, you’d drop down to Tattersall’s on Hyde Park Corner. It had been founded in 1766 by a former groom of the Duke of Kingston, and held auctions every Monday and on Thursdays during the Season. Tatersall’s charged a small commission on each sale, but also charged both buyers and sellers for stabling.

You could buy horses, carriages, hounds, harnesses — whatever a gentleman (or his lady, but ladies did NOT go to Tattersall’s) needed. And in Regency times, gentlemen visited on other days to place a bet on an upcoming race, or just to meet and chat. The Jockey Club met there, and moved with it to a later London location and then to Newmarket. Tattersall’s is still a leading bloodstock auctioneer, and still in Newmarket.

My hero in A Raging Madness had been a cavalry officer. Britain had no formal studs for breeding war horses. Instead, they bought their horses from civilian breeders. This meant the British cavalry rode horses bred to be hunters, race horses, and carriage horses—usually thoroughbreds or thoroughbred crosses. Each colonel bought the horses for his own regiment. In 1795, the regulations established a budget of thirty pounds for a light mount and forty for a heavy mount. This budget didn’t change for the rest of the war with France, despite wartime shortages.

Here Alex is telling his brother his plan:

“Father says you are planning to breed horses. For the army, Alex? Racing? What’s your plan?”

“Carriage and riding horses, we thought. I know more about training war horses, of course, but to breed them to be torn apart for the sins of men? I don’t have the heart for it. And there’s always a market for a good horse.”

Regency Redingote explains the origins of the term ‘blood horse’, and the pedigree of the General Stud Book. https://regencyredingote.wordpress.com/2010/11/05/the-english-blood-horse/

Regency Writing has a useful article on housing horses, and the work of a stable. http://regencywriter-hking.blogspot.co.nz/2013/07/eighteenth-and-nineteenth-century-horse.html

A Raging Madness: Book 2 of The Golden Redepennings

Their marriage is a fiction. Their enemies are all too real.

Ella survived an abusive and philandering husband, in-laws who hate her, and public scorn. But she’s not sure she will survive love. It is too late to guard her heart from the man forced to pretend he has married such a disreputable widow, but at least she will not burden him with feelings he can never return.

Alex understands his supposed wife never wishes to remarry. And if she had chosen to wed, it would not have been to him. He should have wooed her when he was whole, when he could have had her love, not her pity. But it is too late now. She looks at him and sees a broken man. Perhaps she will learn to bear him.

In their masquerade of a marriage, Ella and Alex soon discover they are more well-matched than they expected. But then the couple’s blossoming trust is ripped apart by a malicious enemy. Two lost souls must together face the demons of their past to save their lives and give their love a future.

Jude Knight’s writing goal is to transport readers to another time, another place, where they can enjoy adventure and romance, thrill to trials and challenges, uncover secrets and solve mysteries, delight in a happy ending, and return from their virtual holiday refreshed and ready for anything.

She writes historical novels, novellas, and short stories, mostly set in the early 19th Century. She writes strong determined heroines, heroes who can appreciate a clever capable woman, villains you’ll love to loathe, and all with a leavening of humour.

NOW FOR THE GIVEAWAY:  Comment below to be part of the giveaway. Ms. Knight will give one lucky winner a choice of Candle’s Christmas Chair, Gingerbread Bride, or Farewell to Kindness, all part of The Golden Redepennings series. The Giveaway ends at midnight EDST, Monday, May 22.

When Viscount Avery comes to see an invalid chair maker, he does not expect to find Min Bradshaw, the woman who rejected him 3 years earlier. Or did she? He wonders if there is more to the story. For 3 years, Min Bradshaw has remembered the handsome guardsman who courted her for her fortune. She didn’t expect to see him in her workshop, and she certainly doesn’t intend to let him fool her again. 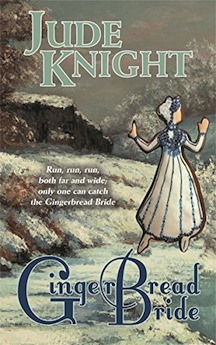 Lieutenant Rick Redepenning has been saving his admiral’s intrepid daughter from danger since their formative years, but today, he faces the gravest of threats–the damage she might do to his heart. How can he convince her to see him as a suitor, not just a childhood friend?

Travelling with her father’s fleet has left Mary Pritchard ill-prepared for London Society, and prey to the machinations of false friends. When she strikes out on her own to find a more suitable locale to take up her solitary spinsterhood, she finds adventure, trouble, and her girlhood hero, riding once more to her rescue. 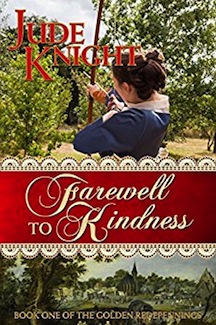 Rede, the Earl of Chirbury wants the beautiful widow, Anne Forsythe, from the moment he first sees her. Not that he has time for dalliance, or that the virtuous widow would be available if he did. Or perhaps not so virtuous? She lives rent-free in a cottage belonging to the estate, courtesy of his predecessor and cousin, George. And her daughter’s distinctive eyes mark the little girl as George’s child. But it isn’t just the mystery that surrounds her that keeps drawing him to her side.

Anne Forsythe has good cause to be wary of men, peers and members of the Redepenning family. The Earl of Chirbury is all three, and a distraction she does not need. If she can hide her sisters until the youngest turns 21, they will be safe from her uncle’s sinister plans. And she is a virtuous woman, her reputation in the village built through years of impeccable behaviour. The Earl of Chirbury is not for her, and she will not fall to his fascinating smile, gentle teasing, and tragic past. Let him continue to pursue the villains who ordered the deaths of his family three years ago, and leave her and her family alone.

But good intentions fly in the face of their strong attraction, until several accidents make Rede believe his enemies are determined to kill him, and Anne wonder whether her uncle has found her. To build a future together, they must be prepared to face their pasts—something their deadly enemies have no intention of allowing.

9 Responses to A Bit About Horses, Guest Blog from Jude Knight + Release of “A Raging Madness” + a Giveaway