“Slow Dance for Darcy, or Slow Awakening?” a Guest Post from Collins Hemingway

Posted on April 3, 2017 by reginajeffers

Collins Hemingway shared this post on Austen Authors in early December 2016, but I thought some of you might enjoy the opportunity to add your “two cents” to the conversation. What exactly is “mate value” and “slow love”?

John Tierney, a regular commentator on psychological issues for the New York Times, wrote an article discussing the concept of “mate value,” which confirms a long-held notion that people tend to marry others like themselves in terms of looks, wealth, and education. He holds out hope for mismatched couples, however, through a process called “slow love.”

Studies show that the longer someone spends with a potential but mismatched mate, the higher they rate the other in sex appeal. Over time, an individual has the opportunity to uncover the other person’s strengths, which can outweigh the initial impression. (See Tierney’s article, for couples time can upend the laws of attraction.)

This phenomenon of “slow love” accounts for what Tierney calls the “schlub-gets-babe” movie formula, such as Knocked Up, in which the unkempt Seth Rogen lands the gorgeous Katherine Heigl. There’s a whole category of beast and the beauty TV sitcoms in which a not particularly attractive and often bumbling male somehow ends up married to a wife who is not only more attractive but usually smarter than the man. Kevin James has made a career of such roles in The King of Queens and Kevin Can Wait, paired with the unlikely mates, sharp-witted beauties Leah Remini and Erinn Hayes. 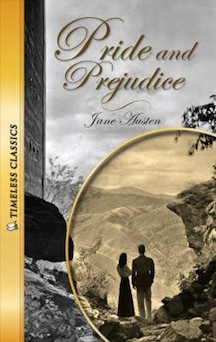 Tierney may be off the mark, however, in his other example, Pride and Prejudice, which he cites lovingly throughout his article. He notes that there are “hundreds of romance novels” in a category that some have named “Plain Jane and Hot Stud,” a theme that was equally popular when Jane Austen wrote her novels.

Tierney distinguishes between the features of Darcy and Liz on sociological grounds. Darcy, with his “fine, tall person, handsome features, noble mien,” must find someone of equal attractiveness and class. His first reaction is to dismiss her looks: “She is tolerable, but not handsome enough to tempt me.” And of course she has the poor, gauche family hanging about.

That Darcy and Liz eventually get to know each other shows the workings of “slow love,” in Tierney’s view. He doesn’t challenge the assumption that Elizabeth’s appearance is no better than “tolerable.” Based on Darcy’s initial negative reaction to Elizabeth’s looks, at least one movie production has made Elizabeth a plain young woman.

But Tierney and the movies miss a fundamental point: All the other characters in the ballroom are described objectively by the narrator—Bingley is “good-looking and gentlemanlike,” his sisters are “fine women with a decided air of fashion,” Darcy is a hunk—though his “disagreeable countenance” soon “turned the tide of his popularity,” and so on.

Elizabeth, however, is never described objectively—she is seen only from Darcy’s eyes. Did Darcy’s sharp eye really see a plain woman or did his prejudiced eye overlook an attractive one? At the same ball, for instance, Bingley sees “several … uncommonly pretty” girls, including Elizabeth. Bingley, of course, is intoxicated with Jane—the one acknowledged beauty in the room—and may feel he’ll make a better impression if his friend is more sociable. But he could have just as easily observed that, despite the lack of lovelies, Darcy should at least try to enjoy himself and not be such an obvious grouch. But Bingley doesn’t—he specifically points out Elizabeth as being both available and “very pretty.”

Later, when Darcy begins to see more of Elizabeth Bennet, he experiences contradictory feelings, and so Tierney is right about the effect of additional time: “But no sooner had he made it clear to himself and his friends that she hardly had a good feature in her face, than he began to find it was rendered uncommonly intelligent by the beautiful expression of her dark eyes. … Though he had detected with a critical eye more than one failure of perfect symmetry in her form, he was forced to acknowledge her figure to be light and pleasing; and in spite of his asserting that her manners were not those of the fashionable world, he was caught by their easy playfulness.”

Two things about this paragraph: First, I risk heresy and expulsion from Austenia by asserting it contains the one line Austen got wrong. It would not be that Elizabeth’s features were “rendered uncommonly intelligent by the beautiful expression of her dark eyes” but rather that her features were “rendered uncommonly beautiful by the intelligent expression of her dark eyes.” Unless, of course, she was physically gorgeous! Second, and more important, it is not the narrator describing Elizabeth’s features, it is Darcy. His view of her is changing and along with it his perception of her physical attractiveness.

One of the charms of Austen’s sly prose is that the reader can never know whether Elizabeth’s intelligence and wit eventually outweigh her poor looks, or whether her physical beauty becomes apparent to Darcy only when her many other attributes overwhelm his social bias.

After all, the book’s original title was not Plain Jane and Hot Stud but First Impressions.

1 Response to “Slow Dance for Darcy, or Slow Awakening?” a Guest Post from Collins Hemingway