Historical Handfasting as a Plot Point in “A Dance with Mr. Darcy” + Excerpt + Giveaway

Although Darcy and Elizabeth do not come to their Happily Ever After in A Dance with Mr. Darcy through handfasting, it is a subject of discussion. They are in Scotland, and handfasting was a more common practice there. But what was handfasting?

Historically, marriage toward the latter part of the medieval period in Scotland could be executed by the exchange of consent between a man and a woman. This was what we say in the modern setting, i.e., “I Edward take you Margaret to be my wife.” During the medieval times, witnesses were not necessary to make the marriage valid. Basically, this marriage by consent held true from the early 1200s to the Reformation. This was a practice of canon law, essentially the Roman Catholic Church, not civil law. Oddly, this practice went against the earlier precepts of parental consent and the marriage only being binding after it was consummated. However, the Catholic church argued that these “clandestine” marriages, as they were termed, were as legal and as binding as were those performed by a priest.

Some of these practices changed with the Council of Trent (1563). Roman Catholic law then insisted upon a priest performing the marriage for it to be legal. However, Scottish Reformation did not get around to “reforming” the marriage laws as quickly as did other Protestant countries. Both the Protestant Kirk and Scottish civil law did not change. Consent between the couple remained as the basis for a legal joining. That being said, the Protestant Kirk did not approve of “clandestine” marriages, any more than did the Catholic contingent. Many Scottish Protestants attacked the practice, calling it a form of “fornication” and declaring it illegal.

So, how does this apply to “handfasting”? In late medieval Scotland (and northern England), “handfasting” was a term for “betrothal.” In A. E. Anton’s “‘Handfasting’ in Scotland” (The Scottish Historical Review, October 1958), we learn:

“Among the people who came to inhabit Northumbria and the Lothians, as well as among other Germanic peoples, the nuptials were completed in two distinct phases. There was first the betrothal ceremony and later the giving-away of the wife to the husband. The betrothal ceremony was called the beweddung in Anglo-Saxon because in it the future husband gave weds or sureties to the woman’s relatives, initially for payment to them of a suitable price for his bride but later for payment to her of suitable dower and morning-gift. The parties plighted their troth and the contract was sealed, like any other contract, by a hand-shake. This joining of hands was called a handfæstung in Anglo-Saxon, and the same word is found in different forms in the German, Swedish and Danish languages. In each it means a pledge by the giving of the hand.

“… The joining of the hands became a feature of betrothals in Scotland and in England during the medieval period. A Scottish protocol narrates that on 24 July 1556, the Vicar of Aberdour ‘ministrat and execut the office anent the handfasting betwix Robert Lawder younger of the Bass and Jane Hepburn docter to Patrick Errl Botwell in thir vordis following: “I Robert Lawder tak thow Jane Hepburne to my spousit wyf as the law of the Haly Kirk schawis and thereto I plycht thow my trewht and syklyk I the said Jane Hepburne takis you Robert Lawder to my spousit husband as the law of the Haly Kirk schaws and therto I plycht to thow my trewth,” and execut the residew of the said maner of handfasting conforme to the consuetud usit and wont in syk casis’ What this ‘consuetude’ was may be gathered from a protocol on the sponsalia of David Boswell of Auchinleck and Janet Hamilton, daughter of the Earl of Arran. After the consents had been exchanged ‘the curate with the consent of both parties with their hands joined betrothed the said David and Janet who took oath as is the custom of the Church’. In fact, the ceremony of joining hands became so closely associated with betrothals in medieval times that in Scotland, and apparently the north of England, the ordinary term for a betrothal was a handfasting. The use of the term in this sense persisted in Elgin as late as 1635.”

One catch in all this is the idea that if a couple had sex after becoming handfasted, they were no longer betrothed, but rather legally married. Handfasting could result in marriage if the couple made their consents to marry or if the pair enjoy conjugal relationships. If they did not exchange consents and did not have marital relationships, they were not married (simply betrothed, which means the betrothal could still be broken).

“History of Marriage in Great Britain and Ireland”  via Wikipedia ~

Enjoy this scene from A Dance with Mr. Darcy: A Pride and Prejudice Vagary. 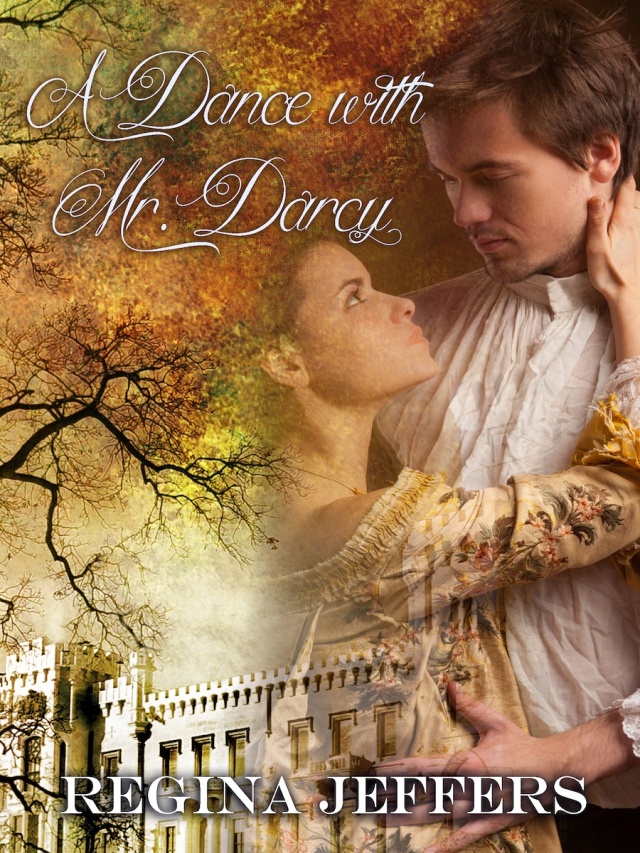 The reason fairy tales end with a wedding is no one wishes to view what happens next.

Five years earlier, Darcy had raced to Hertfordshire to soothe Elizabeth Bennet’s qualms after Lady Catherine’s venomous attack, but a devastating carriage accident left him near death for months and cost him his chance at happiness with the lady. Now, they meet again upon the Scottish side of the border, but can they forgive all that has transpired in those years? They are widow and widower; however, that does not mean they can take up where they left off. They are damaged people, and healing is not an easy path. To know happiness they must fall in love with the same person all over again.

Although he did not think it possible for anyone to alter Elizabeth’s decision, Darcy was thankful to have his sister in residence at Alpin Hall, for Georgiana made a concerted effort to keep his mind off the misery that awaited him at Pemberley when he returned to Derbyshire. Despite his cousin’s objections, she had sent Fitzwilliam riding for Newcastle in search of information on Mr. Wickham’s disappearance.

“It has been five years, Georgiana,” the colonel protested. “I can learn more by addressing letters to the scoundrel’s former commanding officers.”

“You will do both,” she insisted. “Those in London overseeing the war’s end will simply examine their files on Mr. Wickham, while those remaining in Newcastle area will possess a more personal story to share, and you must be there to learn their tales. No one can deny such an imposing figure as my husband,” she added with a genuine smile.

Fitzwilliam sighed good-naturedly. “It is a good thing, Mrs. Fitzwilliam, that your husband holds you in affection.”

“It is an excellent thing, sir,” she responded with a blush to her cheeks. Darcy watched the pair with envy lodging in his heart. He would never know such contentment. Even if he could learn Wickham’s fate, it would not ensure that Elizabeth would reconsider his proposal.

In Fitzwilliam’s absence, Georgiana accompanied him as Darcy called in upon Daven Hall each day to learn more of the estate. While he examined the books and the various structures upon the property, his sister met with the housekeeper and toured the various rooms to note necessary repairs and required refurbishing. He was grateful for Georgiana’s presence. It was good to be with family. His hours alone at Pemberley had only added to his compounded sorrow.

“Dance with me, William,” his sister pleaded one evening, as she rose from the bench before the pianoforte. She had entertained him after supper with a variety of musical pieces. He always knew such pride when she performed, for he recalled the exact date when Georgiana claimed confidence in her performance. It was the evening at Pemberley when Elizabeth and her relations joined him and the Bingleys. Elizabeth encouraged Georgiana’s playing and remained by his sister’s side throughout the evening.

“I believe my dancing days are over,” he replied.

“Nonsense.” Georgiana caught his hand and attempted to tug him to his feet. “Perhaps you can no longer hop about in a reel or do a quickstep in a country dance, but surely you can manage a minuet or a waltz. Now, stand for me, William.”

“Georgiana, this is ridiculous,” he protested, but he permitted her to pull him upward.

Once he stood stiffly before her, she placed a hand upon his shoulder and waited for his hand to claim her waist. “Should I hum a tune?”

“I will likely send us tumbling to the floor,” he grumbled as he positioned his hand at her side.

Georgiana giggled. “It has been too many years since we took a tumble together.”  She nudged him into a slow step forward while continuing her tale. “I loved it when you would come home from school on holiday, for you would spend hours entertaining me. Do you recall how often I soiled my dress attempting to keep up with you and Fitzwilliam and Lindale or you and George Wickham? I was often quite clumsy and would tumble down the hill, but you always took the blame and Father’s punishments.”

“You were but a babe and always so thin. I could not permit you to know an evening without your supper,” he said in serious tones.

Georgiana’s cheeks dimpled with an impish smile. “You would sneak into the schoolroom and teach me something of how to swing a cricket bat or how to block a thrust from an opponent’s sword.”

“We destroyed a good many of your parasols. Your governess was never happy when you and I were about a new adventure,” he repeated in tenderness.

“Then you would sprawl upon the floor while I showed you my dolls or the new letters I had learned or a drawing. You would praise my efforts,” she said in contentment. “You were always so patient with me. I could not have asked for a better brother.”

Darcy halted their progress to place a kiss upon her forehead. It was only then that he realized they had made a full turn and then some about the room. “You have played me with your compliments,” he said in a tease. “You still have the means to divert me.”

She rose on her toes to place a gentle kiss upon his cheek. “I wish you to know happiness, William, but first you must again believe in your dream.”

Darcy attempted to keep the frown from his features. “I do not know whether I dare. Her husband passed two months after I married Amelia. If I had waited—had rejected Lady Matlock’s manipulations—if I had made it my business to learn more of Elizabeth’s life, things could now be different. She admitted to loving me, Georgiana; yet, she still sent me away. How can I keep hope alive when so much has changed between us? Sometimes, love is not enough.”

“Love is always enough,” Georgiana countered. “It must be, for the world would turn in upon its head without love. You must simply trust that Mrs. McCaffney knows your heart. The lady is the complementary part of your soul. She will support you upon your journey in the same manner as I supported your steps in our waltz.”

Now for the GIVEAWAY. I have two eBook copies of A Dance with Mr. Darcy available. To enter leave a comment below. The giveaway will end on Friday, March 24, at midnight EDST.

36 Responses to Historical Handfasting as a Plot Point in “A Dance with Mr. Darcy” + Excerpt + Giveaway