Posted on February 21, 2017 by reginajeffers

Okay, I admit it. When it comes to understanding the British system of currency in the books I read, even I am sometimes confused. So, I set out to learn more of the currency.

The common currency was created in 1707 by Article 16 of the Articles of Union.

Here is a guide to British currency:

Pound: This was the basic unit of currency. One could find possess a “pound” in the form of a paper note or in the form of a sovereign (a gold coin). Sometimes it was also called a “quid,” but this was more of a slang term. Another slang term found in the period was a “monkey,” which was equal to £500. Meanwhile, a “pony” was £25. The pound sign (£) represents Libra, a pound weight in Latin. “The symbol derives from a capital “L”, representing libra, the basic unit of weight in the Roman Empire, which in turn is derived from the Latin name of the same spelling for scales or a balance. The pound became an English unit of weight and was so named because it originally had the value of one tower pound (~350 grams) of fine (pure) silver.” (Pound Sign)

In 1066, after the Norman Conquest, the pound was divided into twenty shillings or 240 pennies. It was as such until the decimalization on 15 February 1971. Prior to that time, money was divided into pounds (£ or 1), shillings (s. or/-) and pennies (d.).

Shilling: The most popular coin of the period was a shilling. It was used to purchase food, coal, soap, cloth, etc. There are 20 shillings to a pound and twelve pennies to a shilling. The symbol s. or /- came from the Latin solidus. The slang term for a shilling was “bob.”

“The word shilling comes from scilling, an accounting term that dates back to Anglo-Saxon  times, and from there back to Old Norse, where it means ‘division.’ One abbreviation for shilling is s (for solidus). Often it was informally represented by a slash, standing for a  long s or ʃ thus 1/6 would be 1 shilling and sixpence, often pronounced “one and six” (and equivalent to 18d; the shilling itself was valued at 12d). A price with no pence was written with a slash and a dash: 11/–. Quite often a triangle or (serif) apostrophe would be used to give a neater appearance, such as 1’6 or 11’–. During the Great Recoinage of 1816, the mint was instructed to coin one troy pound (weighing 5760 grains) of standard (o.925 fine) silver into 66 shillings, or its equivalent in other denominations. This effectively set the weight of the shilling, and its subsequent decimal replacement 5 new pence coin, at 87.2727 grains or 5.655 grams from 1816 to 1990, when a new smaller 5p coin was introduced.” (Shilling)

Penny: This was the smallest unit of currency. The plural of “penny” is “pence.” There were 12 pence for each shilling and 240 pence for each pound. “The earliest halfpenny and farthing (¼d.) thus found date to the reigns of Edward I and Henry III, respectively. The need for small change was also sometimes met by simply cutting a full penny into halves or quarters. In 1527, Henry VIII abolished the Tower pound of 5400 grains, replacing it with the Troy pound of 5760 grains and establishing a new pennyweight of 1.56 grams. The last silver pence for general circulation were minted during the reign of Charles II around 1660. 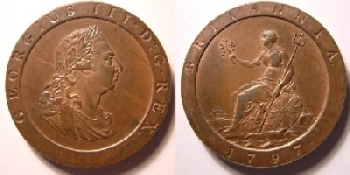 “Throughout the 18th century, the British government did not mint pennies for general circulation, and the bullion value of the existing silver pennies caused them to be withdrawn from circulation. Merchants and mining companies began to issue their own copper tokens to fill the need for small change. Finally, amid the Napoleonic Wars, the government authorized Matthew Boulton to mint copper pennies and twopences. Typically, 1 lb. of copper produced 24 pennies. In 1860, the copper penny was replaced with a bronze one (95% copper, 4% tin, 1% zinc). Each pound of bronze was coined into 48 pennies.” (Penny)

If I have not lost you completely at this point, we must also address coins that a reader might encounter in an historical document or novel. There were also special coins that were used that spoke of “multiples” and “fractions” of shillings and pence. For example…

Guinea = one pound, one shilling (Slang word for a guinea was “yellowboy.”) You will read in historical novels where a gentleman paid for his business transactions in guineas.

Other coins in multiples and fractions are…

For a more detailed explanation visit The Proceedings of Old Bailey, which also addresses questions on wages and the cost of living at time, or British Life and Culture.