William Paca, Rabble Rouser and Signer of the Declaration of Independence

Posted on November 30, 2016 by reginajeffers

William Paca was born in Abington, Maryland, on October 30, 1740, at his family’s home in what is now Harford County, north of Baltimore. He was the second son of John and Elizabeth Smith Paca and the fourth generation of Pacas in Maryland. His great-grandfather Robert Paca had emigrated from England. Robert Paca was brought to the colonies before 1660 by a man named John Hall, who owned an estate in Anne Arundel County. To pay his transportation costs, Paca most likely indentured himself to Hall as a servant. After Hall’s death, Robert Paca married his widow, and thus acquired a family, position, and considerable property. Though Robert Paca did not die a wealthy man, he was able to put his family on the path to becoming landowners, planters, and public servants.

William Paca was tutored at home in the classics. In 1752, William and his brother were sent to attend school at the Academy and Charity School. He attended the Inner Temple in London. When he had finished his general studies, he attended the College of Philadelphia and later graduated with a bachelor of the arts degree in 1759. In 1762, he achieved a master of the arts degree. He then studied law, under Stephen Bradley, in Annapolis at the office of an eminent lawyer.

Before seeking admission to the Bar of Maryland, he attended training at the Inner Temple in England.In 1764, he was admitted to the bar in Maryland. As his career took off, William Paca asked Mary Chaw to be his wife. They married on May 26, 1763. Together, they had three children.

His political engagement began in his interest in the law. He wrote and organized against a poll-tax originated by the royal governor just prior to the outbreak of hostilities. He was a local leader in the patriot movement in the late 1770s.

As the British continued to agitate the colonies, William began forming a friendship with Samuel Chase (another signer of the Declaration of Independence). In 1765, the two men started the Sons of Liberty in Annapolis as a response to the Stamp Act. After this, the two men became very close friends.In 1771, William Paca was elected to the Maryland Legislature, where he stayed until 1774. In 1774, William was asked to go to the Continental Congress a delegate for Maryland. He spent thousands of dollars of his own money to supply Maryland’s troops during the war.

Paca and his friends, Samuel Chase and Thomas Stone, were rabble rousers. They often raged at the wrong doing executed by the British controlled government. They were known to burn various figures in effigy. Denise Kiernan and Joseph D’Agnest in Signing Their Lives Away (Quirk Books, ©2009, ppl 158 -159) relate a humorous tale. “In one public demonstration, the two [Chase and Paca] staged a mock execution of an unpopular law that the royal governor had just passed. They inscribed the law on a sheet of paper, marched it to a mock gallows, strung it up as if they were hanging it by the neck, waited until it was ‘dead,’ cut it down, lay it in a coffin, and buried it under the gibbet. A ship parked in Chesapeake Bay fired a small cannon to cap off the ceremony. Paca owned the ship, and he no doubt settled the bar tab wherever the protestors partied afterward.

“Later, the duo objected to a tax paid by citizens to support the Church of England. Chase’s father was a clergyman, but he and Paca thought it was rong for the government to collect a tax that benefited a single religion. The letters and articles Paca and Chase wrote and published branded them as rebels in the eyes of the Tories and as patriots in the eyes of the Whigs. The legal eagles had their first big test case when a political friend was arrested and fined for refusing to pay the tax. The jury found for their client, awarded him £60 in damages, and Paca and Chase were hailed as heroes. Their adversary in the courtroom was friend and fellow signer Thomas Stone.”

He was reelected and served there until 1779 when he was appointed chief justice of the State of Maryland. In 1782 he was elected governor of that state. George Washington appointed Paca as Chief Justice of the United States Supreme Court for the district of Maryland from 1789, until his death at “Wye Hall,” Queen Anne County, Maryland, on October 23, 1799. Paca cared deeply for the issues of war veterans and worked to provide assistance to those who sacrificed for the nation.  He is interned in the family burial ground, Queen Anne County. During his term as governor he championed education in religion and literature and said this to the general assembly of Maryland:

It is far from our intention, to embarrass your deliberations with a variety of objects; but we cannot pass over matters of so high concernment as religion and learning. The sufferings of the ministers of the gospel of all denominations, during the war, have been very considerable; and the perseverance and firmness of those who discharged their sacred functions under many discouraging circumstances, claim our acknowledgments and thanks. The bill of rights and form of government recognize the principle of public support for the ministers of the gospel, and ascertain the mode. Anxiously solicitous for the blessings of government, and the welfare and happiness of our citizens, and thoroughly convinced of the powerful influence of religion, when diffused by its respectable teachers, we beg leave most seriously and warmly to recommend, among the first objects of your attention on the return of peace, the making such provision as the constitution, in this case, authorizes and approves.

Charles Wilson Peale’s famous portrait of William Paca, painted in 1772, says much about the man. With arm akimbo, he is very much the self-assured diplomat, lawyer, planter, and patriot. An extremely attractive, tall, yet large, man, he exudes the charm, fashionable demeanor, and educated manner for which he was known. With a bust of Cicero beside him and his Annapolis garden and summerhouse in the background, Paca fills the seven and a half foot canvas with the presence and confidence that would help win independence for the colonies. Many years later, Peale described his famous commission in these words: “A handsome man, more than six feet high, of portly appearance, being well educated and accustomed to the best company, [Paca] was graceful in his movements and complaisant to everyone; in short, his manners were of the first polish. In the early period when the people’s eyes first became opened to their rights,[he] made the first stand for the Independence of the People.”

Later in his life, Paca claimed a child he had sired out of wedlock with a freed black woman. His first died ten years into their marriage. Two of their children also passed. He remarried, but the second wife and their child also died. Therefore, he chose to raise his “bastard” child, a girl named Hester. He sent her to the finest schools. 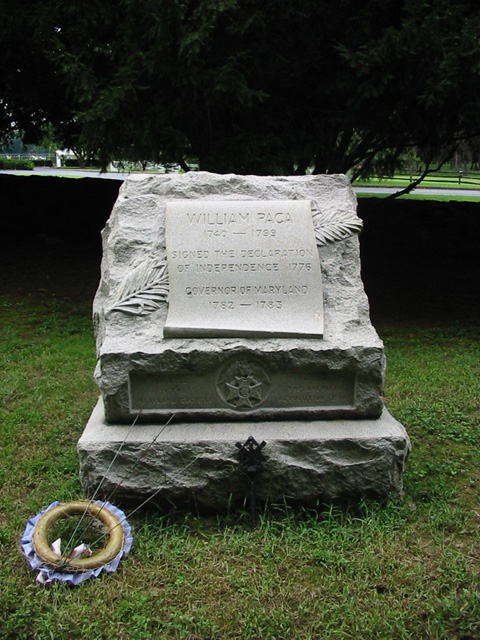 “William Paca,” The Society for the Descendants of the Signers of the Declaration of Independence

4 Responses to William Paca, Rabble Rouser and Signer of the Declaration of Independence