Oliver Wolcott, the Signer of the Declaration of Independence who Melted King George’s Statue for Revolutionary Bullets

Posted on November 17, 2016 by reginajeffers 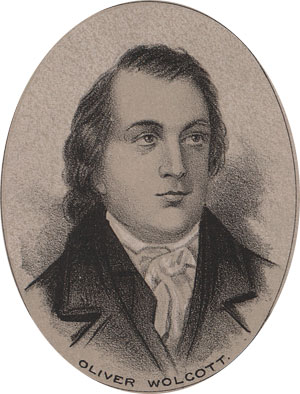 Oliver Wolcott was born on November 20, 1726, the youngest of fourteen children, at Windsor, Hartford, Connecticut. His father, Roger Wolcott, was one of the first governors of the colony of Connecticut. He had three brothers who survived childhood (Alexander, Josiah, and Erastus) and four sisters (Sarah, Hephzibah, Ursula, and Mariann). They lived in Windsor, Connecticut, where both of Oliver’s parents grew up.

The earliest established member of the Wolcott line in England was William Wolcott, who was born in 1463 during the War of the Roses, and died in 1502.  There is some evidence that this line of the Wolcott family may date back even further, as far back as the knight, Sir John Wolcott in 1382.

Oliver’s great grandfather was Henry Wolcott, an English gentleman from the Parish of Lyiard, St. Lawrence, Somersetshire who was born in 1578 in Tolland, Somerset.  Described as “a resolute Puritan, a stout-hearted and God-fearing man,” he and his wife, Elizabeth Saunders, and three children emigrated on the ship, Mary and John.  The ship left Plymouth, England, in 1630 and arrived in Massachusetts on May 31, 1630.  They left behind two daughters, Anna and Mary, and their youngest son, Simon, 5 years old, who would become Oliver’s grandfather.

Oliver attended Yale, a distinguished student, graduating in 1747. He studied law, but likely never practiced as an attorney. Even before graduating, he was commissioned by Governor Clinton of New York to raise a volunteer militia to assist in the French and Indian War. He did this, graduated Yale, and proceeded as Captain with his volunteer company to serve the Crown on the northern frontier.

At the close of the war. Wolcott studied medicine with his brother for a while, and he was passionate about poetry. As things took their course, he was appointed sheriff of a new Litchfield County, Connecticut, around 1751. He served as sheriff for more than twenty years.He was a representative of Litchfield in the General Assembly and was a member of the militia. In July of 1775, he served as a Commissioner of Indian Affairs for the Northern Department. In 1771 he rejoined the Militia as revolutionary tensions grew. He was made a Major, and later a Colonel in the Connecticut Militia. During the fighting of the Revolution, Oliver commanded fourteen regiments and was made a Brigadier General in early 1777. He fought in the pivotal Battle of Saratoga, defended Long Island, and thwarted Loyalist raids along Connecticut’s coast.

Oliver married Lorraine Collins of Guilford, Connecticut, on January 21, 1755. Laura was the daughter of Capt. Daniel Collins of Guilford and, like Oliver, was a descendant from an early settler of New England. They had five children. Oliver Jr. was born on January 11, 1760; Laura, born on December 15, 1761; Mariann, born on February 16, 1765; and Frederick on November 2, 1761.

Denise Kiernan and Joseph D’Agnest share an unusual story of Wolcott in their Signing Their Lives Away (Quirk, ©2009, page 65. “Wolcott was in New York Cit on his way home to Connecticut when he witnessed a larger-than-life demonstration in the streets. The date was July 9, 1776. General George Washington had received a copy of the Declaration of Independence, which had just been read to his troops. At the conclusion of the reading, the troops cheered wildly, then all hell broke loose. A mob of soldiers, patriots, and ne’er-do-wells stormed Bowling Green in the Wall Street area and toppled a four-thousand-pound statue of King George III astride a magnificent horse. The statue, which was made of lead coated with a fine layer of gold leaf, either shattered or was smashed by the jeering mob. The king’s head, severed from its body, was supposedly paraded on a pike and eventually shipped to London as a taunt.

“When Wolcott saw the fallen statue, inspiration struck. He had the pieces collected and shipped to the port of Norwalk, Connecticut, where they were then loaded onto ox carts and rolled the sixty-odd miles to the general’s home in Litchfield. There, in the orchard behind his house, Wolcott put his wife, children, and some ladies to work melting the lead and shaping it into bullets for the war effort. Wolcott’s son Frederick would later attest that his father – who was tall and muscular – took an ax and chopped some of the lead pieces himself. A careful scribe reported that the Wolcotts and their merry band of melters fashioned 42,088 bullets from the statue. Laura, age fifteen, made 8,378; Mary Ann, age eleven, 10,790; and Frederick, age nine, a respectable 936. Proud papa took the bullets to Saratoga, where he and his militia helped defeat Burgoyne with hot blasts of ‘His Melted Majesty.'”

In 1774 the Continental Congress appointed him a Commissioner of Indian Affairs in order to secure a treaty at the council at Albany. He was elected to the Congress in 1775. Wolcott was not very active in Congress. He was more concerned with military affairs and did suffer a bought with serious illness in 1776. He was not present for the occasion of the Declaration, but signed it some time later. He spent all of the time between 1776 and 1778 engaged in military affairs. From February to July of 1778, he attended the Congress at Yorktown. In 1778 he was again elected to the congress, where he served until 1784. He then retired, although the congress called him twice more to serve as an Indian Commissioner.

Wolcott was much revered in his native state. In 1786, Oliver was elected Lieutenant Governor of Connecticut. It was a post he held for ten years. In 1787, he was a member of the Connecticut State Convention, which voted for the ratification of the Constitution of the United States. In 1796 he was a presidential elector (he voted for John Adams, who was elected President). That same year, the town of  Wolcott, Connecticut, was named after the Lieutenant Governor when he cast the deciding vote in the state legislature to incorporate the town.

Oliver then became the Governor of Connecticut after Governor Samuel Huntington died in office in early 1796. Oliver was reelected Governor and he died in office on December 1, 1797 at the age of 71. He is buried in the East Cemetery in Litchfield (less than a mile down the road from the Historical Society). Yale honored him with a second degree, he was elected president of the Connecticut Society of Arts and Sciences. His son, Oliver Wolcott, Jr., served as Secretary of the Treasury under Presidents George Washington and John Adams and as Governor of Connecticut.

Proclamation decreed by Oliver Wolcott as the Governor of Connecticut in Litchfield on Oct. 25, 1797. It states the following: “I have therefore, with the Advice of the Council, and by the Desire of the House of Representatives, thought proper to appoint, and do hereby appoint, THURSDAY the sixteenth day of November next to be observed as a Day of public THANKSGIVING and PRAYER to Almighty God, throughout this State;….” from The Litchfield Historical Society

Descendants of the Signers of the Declaration of Independence

U. S. History “Signers of the Declaration of Independence”