Edward Rutledge, Youngest Signer of the Declaration of Independence

Edward Rutledge was born on November 23, 1749, in Charleston, South Carolina. He was the youngest of seven children, son of Doctor John Rutledge, who emigrated from Ireland to South Carolina, about the year 1735. His mother was Sarah Hert, a lady of respectable family, and large fortune. When he was old enough, he, like his brothers before him, studied law at Oxford and in London at the Inns of Court. In 1772, he passed the English Bar.

Shortly thereafter, he returned to Charleston to practice law. He set up a practice with Charles Cotesworth Pinckney. The practice was successful, and Edward Rutledge became one of Charleston’s leading citizens. He purchased land and slaves. On March 1, 1774, he married Henrietta Middleton, sister of Arther Middleton, fellow signer of the Declaration of Independence. Her wealthy father’s political connections would advance Rutledge’s career and make him the youngest member of Congress. The couple had three children, one of whom died as an infant. Henrietta died in 1792, and he remarried, but he and his previously widowed second wife, Mary Shubrick Eveleigh, were childless.

Along with his father-in-law Henry Middleton and his brother, John Rutledge, Edward was to attend the Continental Congress of 1774. However, by time came for him to attend, he was accompanied by Thomas Lynch, Jr., Thomas Heyward, Jr., and Arthur Middleton. The four of them cut a fine line in Congress. They were wealthy, plantation aristocracy, who were each trained in law. As a member of the First Continental Congress, he followed South Carolina’s dictates and opposed a break from England. In a letter written to John Jay, he describes the Congress: “The Congress sat till 7 o’clock this evening in consequence of a motion of R. H. Lee’s resolving ourselves free & independent states. The sensible part of the house Opposed the motion…They saw no wisdom in a Declaration of Independence, nor any other purpose to be answered by it…No reason could be assigned for pressing into this measure, but the reason of every Madman, a shew of our Spirit…The whole Argument was sustained on one side by R. Livingston, Wilson, Dickenson & myself, & by the Powers of all N. England, Virginia & Georgia on the other.”

Later, he became one of the most vocal proponents of freedom. At age 26, he was the youngest signer of the Declaration of Independence. In Congress, he is often portrayed as a “dandy,” especially in comparison to his older and more Puritanical companions. He was from a Southern family of some prominence, and Rutledge dressed and acted the part. Supposedly, it was Rutledge who led the the “postponement” of the signing of the Declaration from June 7, 1776, to July 4, 1776. It is no wonder that prickly John Adams described Edward Rutledge as, “…a perfect Bob-o-Lincoln — a swallow, a sparrow, a peacock; excessively vain, excessively weak, and excessively variable and unsteady; jejeune, inane and puerile.”

When the first vote for independence was taken on July 1, 1776, South Carolina voted against the withdrawal, thinking like the Pennsylvania delegation, that the colonies required a proper army and allies before proceeding. However, once Rutledge was a man who believed in unanimity. So, on July 2, the South Carolina delegation had a change of heart. Even after agreeing to the proposition, Rutledge openly debated some of Jefferson’s language in the document. The original draft spoke of the “execrable commerce”of slavery and England’s part in the slave trade. As a member of Congress representing a state that still permitted the importation of slaves, Rutledge fought to have the anti-slavery language removed. 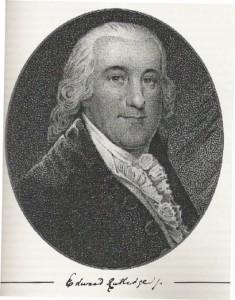 In November of 1776, Rutledge returned to South Carolina and took a seat on the South Carolina Assembly. He also became Captain of Artillery in the South Carolina Militia. He was a member of the Charleston Battalion of Artillery, engaged in several important battles. He fought in the battle of Beaufort in 1779. The colonial legislature sent him back to Congress in 1779 to fill a vacancy. He took his leave again in 1780 when the British conducted a third invasion of South Carolina. He resumed his post as Captain in the defense of Charleston, was captured at the fall of Charleston, along with his brothers-in-law, Thomas Heyward and Arthur Middleton, who were also signers of the Declaration of Independence.  and held prisoner. He was held by the British in St. Augustine from May 1780 until July of 1781. The three men were released in a prisoner exchange.

His mother was also arrested by the British. She was removed from her home and forced to live under house arrest in Charleston, where the British kept her under close observation. They suspected that Mrs. Rutledge had access to information regarding American troops.

After his release, he returned home and returned to his duties on the South Carolina Assembly. He actively served there until 1796, sometimes serving on 19 different committees. He was elected to the Senate a couple times, and in 1798, he was elected governor the state, aligned with the Federalist party; however, he did not complete a full term. Like many of his time, he suffered from gout. It is said that the gout was complicated by exposure to cold and rain in Columbia. Others believe he grieved dearly for the loss of George Washington in December 1799 and fell into a foul state. He died on January 23, 1800. He was buried at the Saint Philip’s Episcopal Church Cemetery in Charleston.

Although he supposedly fought against the anti-slavery paragraph in the original draft of the Declaration (this was never been corroborated with actual written evidence), he did oppose the opening of the African slave trade at this point in his career, even though he owned many slaves. Perhaps, like some of his colleagues, he intended to support the Act for the Gradual Abolition of the Slave Trade. 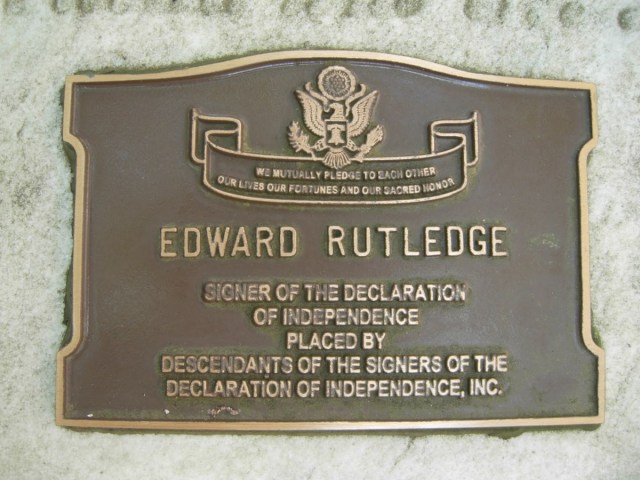 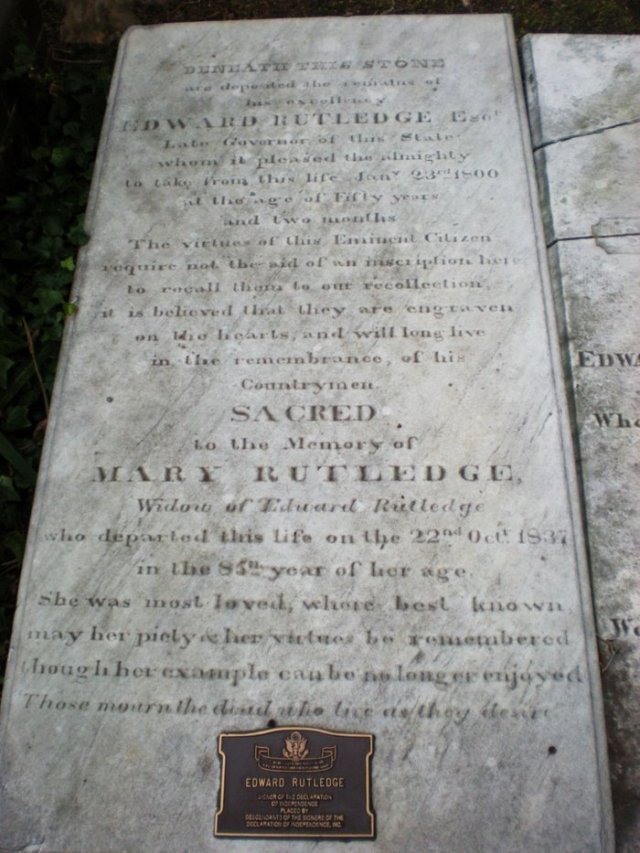 “Edward Rutledge,” Signers of the Declaration of Independence

“Edward Rutledge,” The Society of the Descendants of the Signers of the Declaration of Independence

3 Responses to Edward Rutledge, Youngest Signer of the Declaration of Independence