Posted on August 3, 2016 by reginajeffers 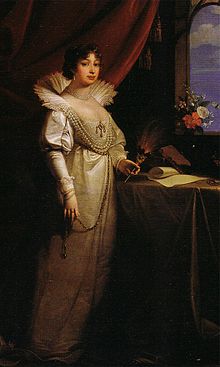 Mourning was one of the great constants in Queen Victoria’s life. The Queen and her beloved Albert lost his maternal step grandmother, Princess Karoline Amalie of Hesse-Kassel, in February 1848. In her journal, Queen Victoria wrote, “My poor Albert is quite broken down … and sad it breaks my heart.” Since early childhood, Karoline Amalie was betrothed to her double first-cousin Prince Frederik of Hesse; however, the engagement was dissolved in 1799 after the apparent affair between her and chamberlain Count Ludwig von Taube, who ended when Landgrave William I dismissed him from his service and expelled from court. In the summer of 1801 Karoline Amalie met Hereditary Prince Augustus of Saxe-Gotha-Altenburg when he visited the Kassel court. In January of 1802 Duke Ernest II of Saxe-Gotha-Altenburg, in the name of his son, asked the hand of the princess in marriage. The wedding ceremony took place in her homeland, Kassel, on 24 April of that year. Prince Albert (youngest son of Karoline Amalie’s stepdaughter Louise) was the favorite step-grandson of the Dowager Duchess. From 1822 to 1835, he and his brother Ernest spent several weeks every year in the care of Karoline Amalie in the Winter Palace. Until her death, Albert maintained with her an active correspondence, where he always called her “Beloved Grandmother” and addressed his letters with the signature “Your faithful grandson Albert”. [Charles Grey, The youth of Prince Albert of Saxe-Coburg-Gotha, Gotha, 1868.] 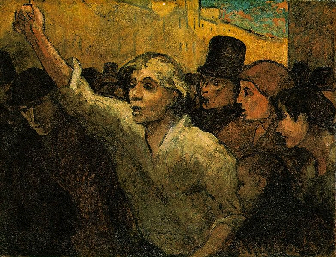 The Year of Revolutions, as it was called by many, had already brought anguish to Victoria’s throne. She feared her own upheaval. The Chartists appeared for a time to have the power to displace the monarchy in favor of a republic. The European continent was in turmoil. The Revolutions of 1848, known in some countries as the Spring of Nations, People’s Spring, Springtime of the Peoples, or the Year of Revolution, were a series of political upheavals throughout Europe in 1848. The revolutions were essentially  democratic in nature, with the aim of removing the old feudal structures and creating independent national states. The revolutionary wave began in France in February, and immediately spread to most of Europe and parts of Latin America. Over 50 countries were affected, but with no coordination or cooperation between their respective revolutionaries. Six factors were involved: widespread dissatisfaction with political leadership; demands for more participation in government and democracy; demands for freedom of press; the demands of the working classes; the upsurge of nationalism; and finally, the regrouping of the reactionary forces based on the royalty, the aristocracy, the army, the church and the peasants. [Merriman, John. A History of Modern Europe: From the French Revolution to the Present, 1996, page 715]

So three days after the passing of Albert’s beloved grandmother, revolution erupted in Paris. The “February Revolution” in France was sparked by the suppression of the campagne des banquets. This revolution was driven by nationalist and republican ideals among the French general public, who believed the people should rule themselves. It ended the constitutional monarchy of Louis-Philippe, [known as the “Citizen King,” a self-styled liberal] and led to the creation of the French Second Republic. The French objected to the disreputable rule of the Orléans monarchy. Louis-Philippe managed to escape the rabble by dressing as a woman and retreating through a servants’ door to freedom. 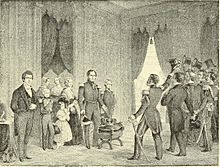 A depiction of Leopold I of Belgium’s symbolic offer to resign the crown if the people demanded it. via Wikipedia

Albert’s Uncle Leopold had similar problems in Belgium. The uprisings  in Belgium were local and concentrated in the sillon industriel industrial region of the provinces of Liège and Hainaut. The most serious threat of the 1848 revolutions in Belgium was posed by Belgian émigré groups. Shortly after the revolution in France, Belgian migrant workers living in Paris were encouraged to return to Belgium to overthrow the monarchy and establish a republic. Karl Marx was expelled from Brussels in early March on accusations of having used part of his inheritance to arm Belgian revolutionaries. Around 6,000 armed émigrés of the ” Belgian Legion” attempted to cross the Belgian frontier. The first group, traveling by train, were stopped and quickly disarmed at Quiévrain on 26 March 1848. The second group was defeated three days later. Belgian border troops tightened their hold on the country. [Chastain, James. “Belgium in 1848.” Encyclopedia of 1848 Revolutions. Ohio University]

When the French royal family arrived on English shores and seeking asylum, Victoria became so agitated that Prince Albert feared she might lose the child she carried [Princess Louise Caroline Alberta was born on 18 March 1848]. It is said that Prince Albert collected clothes for the displaced royal family. Trade disruptions in Europe caused high unemployment. That was magnified by the Whig party’s move to increase the militia to settle the unrest rather than to address the problem at hand. The populace became angry at the social inequities that existed in England.

As Princess Louise came into the world, news arrived of the uproar in Germany. Mobs in Berlin had attacked those involved in Prussian king’s government. The mob had more success in the south and the west of Germany, with large popular assemblies and mass demonstrations. Led by well-educated students and intellectuals, they demanded German national unity, freedom of the press, and freedom of assembly. The uprisings were not well coordinated, but had in common a rejection of traditional, autocratic political structures in the 39 independent states of the German Confederation. The middle-class and working-class components of the Revolution split, and in the end, the conservative aristocracy defeated it, forcing many liberals into exile.

At the beginning of April, word arrived that the Chartists planned a mass demonstration at Kennington Common. According to Jerrold M. Packard in Victoria’s Daughters [St. Martin’s, 1998, pages 36-37], “The protestors meant their actions to be law-biding, but the first real specter of any substantive lower-class challenge to the establishment terrified those who believed that to have been born at the top of the social order was an act of divine planning. Ostensibly representing a mass plea for parliamentary reform – votes for all adult males, abolition of property qualifications for the vote, secret ballot, equal electoral districts – the Chartists fatally stirred their ideas with the stick of socialism, the philosophy still damp from the blood of the guillotine and anathema to the queen and the higher orders at whose head she symbolically stood.

“Buoyed by the events across the Channel, the Chartists claimed to have gathered 6 million signatures – a figure that would have represented a stunningly high proportion of Britain’s male population. The actual chart weighed 584 pounds and was ferried to the House of Commons spread over three cabs. Though most of those who signed would not have supported the tiny minority of revolutionaries advocating actual violence to achieve their objectives, the government was nonetheless sufficiently frightened to enlist 70,000 special constables charged with maintaining “social order.” In the end, parliamentary officials would dismiss the Chartists with the sneer that they had turned in “only” 2 million signatures. [In fact, the chart turned out to have contained 23,000 signatures.] Though the upper classes viewed all this through the prism of a Europe that was in many places really on fire, soon the prevailing mentality said that Britain’s immutable institutions survived because they were superior to those of their foreign counterparts.”

The European Revolutions of 1848

The German-American Corner: The Revolution of 1848

2 Responses to Turmoil in Europe and Queen Victoria’s England