Arthur Middleton (or is it Andrew Marvell?), Signer of the Declaration of Independence 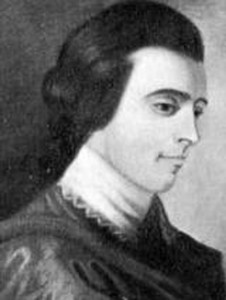 Born in June 26, 1742, Arthur Middleton was the son of Henry Middleton, 2nd President of the Continental Congress, and Mary Williams, only daughter of John Williams, a wealthy landowner, Justice of the Peace and member of the Assembly, at the seat of his father, Middleton Place, St. Andrew’s Parish, Charleston, South Carolina, near the banks of the Ashley. Arthur Middleton’s great-grandfather, Edward Middleton emigrated to the low country of South Carolina, where he became Lord Proprietor’s deputy and assistant justice of the Grand Council, 1768-1684. He received large grants of land on Goose Creek on which he proceeded to establish a plantation which he named the Oaks.

Edward’s son, Arthur Middleton, was born at The Oaks in 1681, and inherited estates in England, Barbados and South Carolina, who was also quite active in public life. He became President of the Convention that overthrew the Lords Proprietors in 1719 and became acting Governor of the Colony from 1725-1730. His wife, Sarah Amory, was the daughter of Jonathan Amory, who was appointed by the Crown as advocate general in South Carolina Admiralty Courts, and became Speaker of the House of Commons.

Henry Middleton, the father of the signer Arthur Middleton, was ranked as one of the wealthiest, most influential and politically active men in the province. Henry began construction of Middleton Place in 1741, a home that would become both an intellectual and emotional focus for successive generations of Middletons. He owned approximately 20 plantations that embraced over 50,000 acres, and about 800 slaves. Henry was Speaker of the Commons, Commissioner for Indian Affairs and a member of the Governor’s Council until 1770 when he resigned the seat to become a leader of opposition to British policy. Henry was chosen to represent South Carolina in the first Continental Congress and on October 22, 1774 was elected President of that august body. He served for a year but when asked to serve another term, declined due to reasons of health. He wanted to return to his home in Carolina and spend his remaining years at the Oaks with the knowledge that his son, Arthur, would succeed him in the Continental Congress.

Arthur Middleton’s earliest education was provided by tutors and private schools in Charleston. As was the custom of the time, Arthur was sent to England at the age of 12 for further education. He attended the celebrated Hackney School (later Harrow) and then on to Westminster School in 1757 and graduated from Cambridge in 1760, at the age of 18.

He studied law at the Middle Temple and traveled extensively in Europe where his taste in literature, music, and art was developed and refined. In 1764 Arthur and his bride Mary Izard settled at Middleton Place. (His wife was a cousin of South Carolina Congressman Ralph Izard; likewise a son of Congressman Izard was married to a niece of Arthur Middleton, and another son married Arthur’s daughter Emma). Keenly interested in Carolina politics, Arthur Middleton was a more radical thinker than his father, Henry Middleton. He was a leader of the American Party in Carolina and one of the boldest members of the Council of Safety and its Secret Committee. In 1776, Arthur was elected to succeed his father in the Continental Congress and subsequently was a signer of the Declaration of Independence. Also in 1776 he and William Henry Drayton designed the Great Seal Of South Carolina. Despite the time he spent in England, his attitude toward Loyalists was said to be ruthless.

While still in his twenties Arthur became keenly interested in politics and was considered a more radical thinker than his father in opposition to Parliament. He was again elected to the South Carolina provincial House of Commons from 1772 to 1775. He became a leader in the “American Party” in Carolina and was appointed by the Provincial Congress in 1775 to a secret committee of five men authorized to place the colony in a “posture of defense.” He recommended a variety of defensive measures for Charleston Harbor. Upon the Committee’s edict, the Royal Magazine of Arms and Ammunition was appropriated for the defense of the Colony. As an “extreme patriot,” Arthur supported the tarring and feathering of those who supported the Crown. As such, he sometimes wrote under the pen name of “Andrew Marvell.”

During the American Revolutionary War, Arthur served in the defense of Charleston.  British forces landed near Charleston in 1780 and ravaged the surrounding area and many of the plantations, including Middleton Place. While the buildings remained intact, the British and Loyalists stole anything of value they could carry, and destroyed everything they could not carry. The Middletons escaped capture at that point by fleeing to Charleston ahead of the British raid.

But when the British occupation of Charleston began, three South Carolina signers, Arthur, his bother-in-law Edward Rutledge and Thomas Heyward were captured, taken from their homes and were incarcerated for almost a year in Saint Augustine, Florida. In July, 1781 he was freed in a prisoner exchange, and was appointed by Governor John Rutledge (the brother of Edward Rutledge) to the state senate. He was re-elected to that seat in 1782. In November of that year, he returned to South Carolina to visit his family from whom he had been separated and to view for the first time the plundering and devastation wrought by the British during their occupation of Middleton Place.

Denise Kiernan and Joseph D’ Agnest in Signing Their Lives Away (Quirk Books, ©2009, page 211) says, “Middleton was again appointed to Congress and served until 1782, when he returned home to his life as a planter and worked to rebuild Middleton Place and the rest of his lands. He served on and off in the state legislature until 1787 and was one of the original trustees of the College of Charleston. Though his work on the third committee assigned to create the Great Seal of the United States didn’t make the cut – the design that finally got the thumbs up was put together by secretary of Congress Charles Thomson – Middleton is credited with having designed the reverse of the seal of South Carolina, which is now incorporated into the current one-sided design. His contribution features the Roman goddess Spes, or “Hope,” and the motto “While I breathe, I hope.”

The tomb of Arthur Middleton at Middleton Place (wikipedia)

1 Response to Arthur Middleton (or is it Andrew Marvell?), Signer of the Declaration of Independence