George Wythe, a Signer of the Declaration of Independence Who Was Poisoned by His Heir 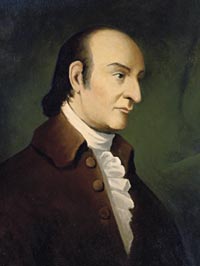 George Wythe (pronounced “with”) was born in 1726 (the second son of three children) at Chesterville in what is now Hampton, Virginia. His father was Thomas Wythe, a planter who died soon after George’s birth. Wythe was reared by his mother, Margaret Walker Wythe, and probably received his early education from her. She taught him Latin and Greek, as well as reading, writing, and his numbers. Margaret Wythe instilled in her son a love of learning that served him all his life. He probably attended for a time a grammar school operated by the College of William and Mary. Even as an old man, Wythe took up new subjects, teaching himself Hebrew, for example.

Both parents died when Wythe was young, and he grew up under the guardianship of his older brother, Thomas. Thomas Wythe later sent George to Prince George County to read law under an uncle, Stephen Dewey, who lived near Petersburg. In 1746, at age 20, he joined the bar, moved to Spotsylvania County, and became associated with a lawyer there. Admitted to the colony’s General Court bar, Wythe first practiced in Elizabeth City County and later with the prominent lawyer Zachary Lewis. In 1747 he married his partner’s sister, Ann Lewis. Wythe was admitted to the York County bar January 16, 1748; his wife Ann died August 8 the same year. The young widower was appointed clerk to the Committee of Privileges and Elections of the House of Burgesses in October.

In 1754 Lt. Gov. Robert Dinwiddie appointed him as acting colonial attorney general, a position that he held for only a few months. The next year, Wythe’s brother died and he inherited the family estate. He chose, however, to live in Williamsburg in the house that his new father-in-law, an architect, designed and built for him and his wife, Elizabeth Taliaferro. They married in 1755, and their only child died in infancy.

Wythe was admitted to the York County bar January 16, 1748; his wife Ann died August 8 the same year. The young widower was appointed clerk to the Committee of Privileges and Elections of the House of Burgesses in October.

At Williamsburg, Wythe immersed himself in further study of the classics and the law and achieved accreditation by the colonial supreme court. He served in the House of Burgesses from the mid-1750s until 1775, first as delegate and after 1769 as clerk. In 1768 he became mayor of Williamsburg, and the next year he sat on the board of visitors of the College of William and Mary. During these years he also directed the legal studies of young scholars, notably Thomas Jefferson. Wythe and Jefferson maintained a lifelong friendship, first as mentor and pupil and later as political allies.

“No man ever left behind him a character more venerated than George Wythe,” Thomas Jefferson wrote. “His virtue was of the purest tint; his integrity inflexible, and his justice exact; of warm patriotism, and, devoted as he was to liberty, and the natural and equal rights of man, he might truly be called the Cato of his country.” (Biography of George Wyatt)

Jefferson learned the law from Wythe, and, in a manner of speaking, Wythe’s signature on the Declaration was a teacher’s endorsement of his pupil’s finest brief. Among Wythe’s other law pupils were John Marshall, perhaps the greatest chief justice of the United States, and St. George Tucker. When Wythe was Virginia’s chancellor, Henry Clay was his assistant.

Wythe first exhibited revolutionary leanings in 1764 when Parliament hinted to the colonies that it might impose a stamp tax. By then an experienced legislator, he drafted for the House of Burgesses a remonstrance to Parliament so strident that his fellow delegates modified it before adoption. Wythe was one of the first to express the concept of separate nationhood for the colonies within the British empire.

An early opponent of the Stamp Act, Wythe was appointed to the Committee of Petition and Remonstrance in 1764 and drafted the remonstrance to the House of Commons that protested against the tax. Nevertheless, Wythe, like Peyton Randolph and others, opposed freshman burgess Patrick Henry’s stormy resolves against the act the next year, regarding the resolves as redundant and ill timed. 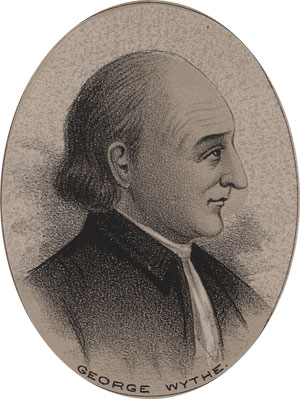 When war broke out, Wythe volunteered for the army but was sent to the Continental Congress. Although present from 1775 through 1776, Wythe exerted little influence and signed the Declaration of Independence after the formal signing in August 1776. That same year, Wythe, Jefferson, and Edmund Pendleton undertook a 3-year project to revise Virginia’s legal code. In 1777 Wythe also presided as speaker of the Virginia House of Delegates.

Wythe’s real love was teaching. In 1779 Jefferson and other officials of the College of William and Mary created the first chair of law in a U.S. institution of higher learning and appointed Wythe to fill it. In that position, he educated America’s earliest college-trained lawyers, among them John Marshall and James Monroe. In 1787 he attended the Constitutional Convention but played an insignificant role. He left the proceedings early and did not sign the Constitution. The following year, however, he was one of the Federalist leaders at the Virginia ratifying convention. There he presided over the Committee of the Whole and offered the resolution for ratification. 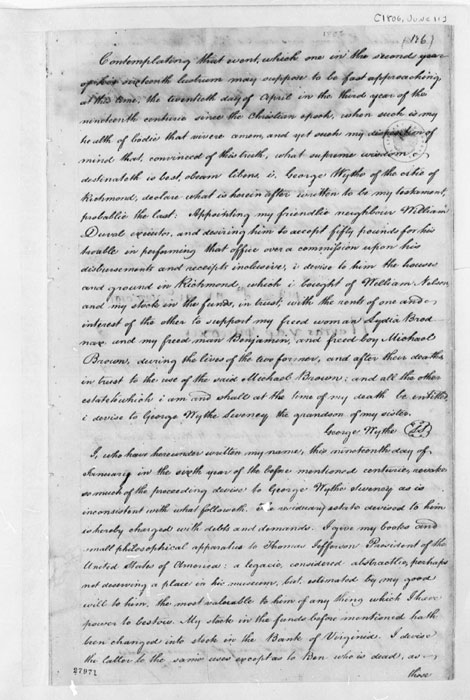 In 1806, in his eightieth year, Wythe died at Richmond under mysterious circumstances, probably of poison administered by his grandnephew and heir, George Wythe Sweeney. Reflecting a lifelong aversion to slavery, Wythe emancipated his slaves in his will. Elizabeth Taliaferro Wythe died in 1787. Long a foe of slavery, George Wythe freed several slaves, including Lydia Broadnax, who chose to remain in Wythe’s service. He conveyed other slaves to Elizabeth’s Taliaferro relatives. Near the end of his life, Wythe wrote his will in favor of a grandnephew, George Wythe Sweeney, but also gave generous bequests to his former slaves Michael Brown and Lydia Broadnax. A ne’er-do-well, Sweeney forged checks against Wythe’s accounts to cover pressing debts. Hoping to avoid detection and inherit his great uncle’s entire estate, he resorted to murder. Strawberries or coffee seem to have been the vehicle by which Sweeney poisoned both his great uncle and Michael Brown, who died within days. Wythe endured two weeks of agony, but as he lay dying, Sweeney’s forgeries were discovered, and Wythe revised his will. 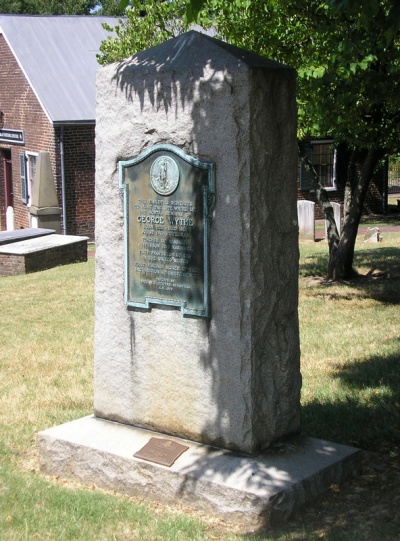 THIS TABLET IS DEDICATED TO MARK THE SITE WHERE LIE THE MORTAL REMAINS OF GEORGE WYTHE. BORN 1726—DIED 1806. JURIST AND STATESMAN, TEACHER OF RANDOLPH, JEFFERSON AND MARSHALL, FIRST PROFESSOR OF LAW IN THE UNITED STATES, FIRST VIRGINIA SIGNER OF THE DECLARATION OF INDEPENDENCE. ERECTED BY PATRIOTIC CITIZENS OF VIRGINIA, A. D. 1922.

His grave is in the yard of St. John’s Episcopal Church in Richmond.

American History from Revolution to Reconstruction and Beyond

Signers of the Declaration of Independence