John Hart, a Man Who Sacrificed Everything as a Signer of the Declaration of Independence 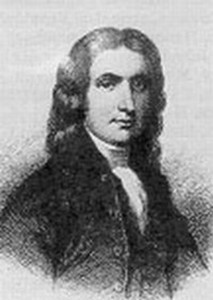 May 11, 2016, marked over 240 years since John Hart’s death. Hart, a signer of the Declaration from New Jersey was one of the many noted Christians among the Founding Fathers. WallBuilders, a Christian based historical group, recently posted some of our legal documents signed by John Hart.

While the actual date of John Hart’s birth is unknown, biographers have put it in the year of 1713, in Hopewell Township, New Jersey. Edward Hart, John’s father, was a Justice of the Peace, a Public Assessor, and a farmer. He arrived in Hopewell about c.1710, at the age of twenty. He married Martha Furman (Firmin), on May 17, 1712, and they had five children, all raised in Hopewell, New Jersey. Not much is known of his family, except that his father helped raise a volunteer army, named “The Jersey Blues,” to assist in the French and Indian War. John became a farmer and had 13 children with his wife the former Deborah Scudder, and his reputation as “Honest John Hart” earned him the trust of those around him. As such, he helped select New Jersey’s delegates to the early Stamp Act Congress that convened in New York in 1765.

John Hart learned to read, write and do figures, but like most men of his time, had little formal schooling. He was well regarded for his common sense, was reasonably well read as proved by his understanding of the law, and showed acumen on business matters.

“John Hart began acquiring property in 1740, buying the “homestead plantation” of 193 acres in the Town of Hopewell New Jersey. In 1751 he and his brother bought a mill that they named Daniel Hart’s Mill, and in the 1770’s he acquired land making him the largest land owner in Hopewell with over 600 acres. In 1773 he bought a substantial mill enterprise in Rocky Hill with his son-in-law John Polhemus, who would later become a captain in the militia, and then in the Continental Army. On his prosperous plantation Hart had many cattle, sheep, swine, horses and fowl, and he also owned four slaves. His adult children were doing well. The original part of his home was made of stone. The original small barn is still on the property which is now privately owned. The home stands on Hart Avenue in Hopewell, New Jersey.” (The Society of the Descendants of the Signers of the Declaration of Independence)

“John Hart began his public service when he was elected to the Hunterdon County New Jersey Board of Chosen Freeholders in 1750, and was elected Justice of the Peace in 1755. With this appointment he was considered a gentlemen and he was able to be called John Hart, Esquire. From 1761-1771, John Hart served on the Colonial Assembly, representing Hunterdon, Morris and Sussex counties. It was there that he first met Abraham Clark, who would later become a fellow signer of the Declaration of Independence. He was appointed to the Court of Common Pleas in 1768. By 1774, he was elected to a committee to ‘elect and appoint Delegates to the First Continental Congress, and to protest the Tea Act.’ In 1775 he was elected to the New Jersey Committee of Correspondence, which communicated and touched base with the other colonies, and served on the Committee of Safety ‘to act in the public welfare of the colony in the recess of the Congress.’ In 1776 he was elected to the New Jersey Provincial congress, and in the same year he was designated to sign the new  ‘Bill of Credit Notes,’ money issued by the State of New Jersey. Hart signed each note himself for a total of 25,000. Hart was often called ‘Honest John.’

“In June 1776 he was elected as one of five New Jersey delegates to the Second Continental Congress with authorization to vote for independence. His fellow delegates and future signers were Abraham Clark, Francis Hopkinson, Richard Stockton and John Witherspoon. When John Hart arrived in Philadelphia, in June 1776 to attend the Congress, he strongly supported the idea of Independence. John Hart was the thirteenth delegate to put his signature on the historic document. He was willing to pledge his life his fortune, and his sacred honor in doing so.

“In August of 1776 New Jersey elected a General Assembly under their new state constitution. Hart was elected to that body, and was selected to be Speaker. He soon returned home to attend to family matters. Sadly, his wife Deborah died on October 8, 1776, with John at her side.

“In December of 1776, as Washington’s army retreated across New Jersey, the British and Hessians ravaged the Hopewell area. Hart’s home and property suffered severe damage, two young children fled to the homes of relatives and Hart himself took refuge wherever he could in the woods, hiding in caves and in the Sourwood mountains. When the British began their withdrawal from the area after the American victories at Trenton and Princeton, Hart returned to his home. John Hart was re-elected twice as Speaker of the Assembly and served until November 7, 1778.” (DSDI) 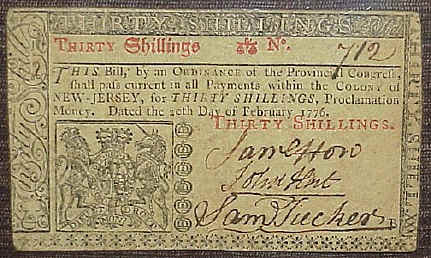 In June 1778, John Hart invited the American army to camp at his farm. Washington accepted his offer, and 12,000 men camped in John Hart’s field during the growing season, and refreshed themselves with the cool water that flowed on the property. The troops left on the 24th of June, and four days later fought and won the Battle of Monmouth.

Chased from his dying wife’s bedside and hunted by the enemy, he wandered about the countryside to avoid discovery by the British, rarely sleeping in the same place two nights in a row. In fact, he even had to sleep in the “resting place of a large dog” to avoid detection by a nearby British patrol. Several times, he was forced to flee as fast as he could to “save his neck” as it had been “marked for vengeance” by the British.

John was finally able to return to his destroyed home in 1777 and gathered his children together. He began to rebuild his farm and property, but never fully recovered his health from the physical hardships of being forced from his home and being exposed to the cold and living outdoors for the year. The “sorrow, humiliation, and suffering, wearing out of his bodily strength, hasten[ed] the approach of decrepitude and death.”  (John Sanderson, Sanderson’s Biography of the Signers to the Declaration of Independence, Robert T. Conrad, editor (Philadelphia: Thomas, Cowperthwaith & Co., 1848), p. 255.) 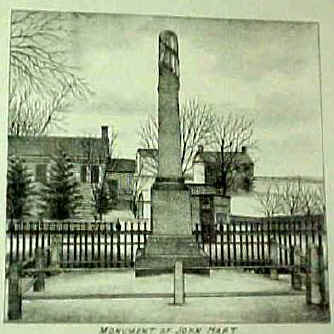 John did not see the fulfillment of his wish of freedom and independence for Americans, for he died before the end of the Revolutionary War. He suffered for long periods with kidney stones and passed from them on May 11, 1779, at the age of 66.