John Penn: A Man Who Aided in Cornwallis’s Defeat and Signer of the Declaration of Independence 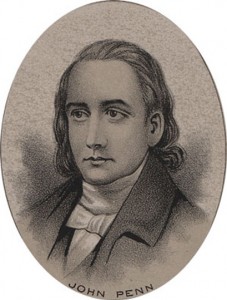 Patriot, Continental Congress member, and North Carolina signer of the Declaration of Independence, John Penn was a native of Caroline County, Virginia.  Like many others who risked their lives to bring freedom to the American states, Penn’s contributions are often overlooked in the historical context.

“John Penn was born on May 17, 1741, at Port Royal, Caroline County, Virginia, the only child of Moses Penn and Catherine (Taylor) Penn. Penn’s grandfather, also named John Penn, was born about 1690 and died in 1741, but it is not known when the Penn family came to America. John’s great-grandfather on his mother’s side, James Taylor, was born in his ancestral home, Pennington Castle, about 20 miles from Carlisle in England. He was a descendant of Baron Taillefer who fought at the Battle of Hastings in 1066 and became the Earl of Pennington. James Taylor arrived in Virginia in 1635 at the age of 20 and established the estate of Hare Forest on Chesapeake Bay between the James and North Rivers. He married Frances Walker, and two of their descendants became presidents of the United States—James Madison and Zachary Taylor.” (The Society of the Descendants of the Signers of the Declaration of Independence)

At age 18, Penn’s life changed when his father died suddenly. He required an occupation to support his mother and their farm.

Although he achieved only a limited, formal education, Penn read many books from the library of Edmund Pendleton, a member of the Virginia House of Burgesses’ and Penn’s uncle. Pendleton was an accomplished attorney, described by his friend Thomas Jefferson as “the greatest orator” in the colonies. Pendleton moved people both by knowledge and empathy, and wrote George Washington’s will the night before Washington was appointed Commander in Chief by the Continental Congress.

Under the tutelage of Pendleton, Penn served as a legal apprentice. Under Pendleton’s auspices Penn had the opportunity to observe some of Virginia’s finest lawyers, learning both the fine points of the law and techniques. Just three years after the death of his father, in 1762, John Penn was licensed to practice law in Virginia, and did so for the next twelve years. Penn first practiced law in Virginia before traveling to Granville County, North Carolina, and establishing a law practice.

On July 28, 1763, Penn married Susanna Lyne and they raised two children. Following many of his relatives, in 1774, Penn moved his family to Granville County, North Carolina, taking up residence near Williamsboro. Ironically, also in 1774, “Penn found himself brought into court on charges of disrespectful and perhaps treasonous remarks about King George. Taxes and duties without representation were the issues, and Penn was in the vanguard of those colonials wanting immediate redress of the wrong or to break away from the mother country. It seems that Penn had been intemperate in remarks about the king in a public meeting. Someone present reported him to royal authorities, and Penn was duly charged. Although tried before friendly townsmen, Penn was found guilty by the perhaps intimidated jury. The judge, perhaps less fearful, limited Penn’s punishment to a one penny fine. A man of principle, John Penn refused to pay the fine, thus sticking his neck out even further.” (DSDI)

In truth, Penn was more progressive than his Uncle Pendleton (who was a judge). Pendleton still hoped the American states might claim the same rights as the citizens in Great Britain, while Penn early on saw the need to separate from the England.

Penn’s involvement in public affairs began with his 1775 election to the Continental Congress. He was reelected in 1777, 1778, and 1779 and served on various committees.

During the American Revolution, Penn contributions to the war effort were noteworthy.  Before signing the Declaration of Independence, Penn and Joseph Hewes, both North Carolina delegates, voted on July 2, 1776 for independence from Great Britain.  Although absent from voting, another North Carolina delegate, William Hooper, signed the Declaration of Independence with Hewes and Penn.  In 1778, Penn signed the Articles of Confederation, and Governor Abner Nash appointed the Tar Heel to serve on the North Carolina Board of War from 1780-1781. 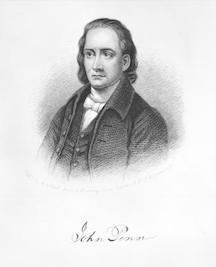 “What was quite out of character for John Penn occurred during the summer heat of a Congressional session when Henry Laurens, the President of Congress, and John Penn agreed to a duel over some murky matter which history does not record. The day of the dual found the antagonists and their party of seconds having breakfast together at the same hotel. A previous rain had turned Philadelphia’s unpaved streets into a treacherous quagmire. After breakfast Penn and Laurens were walking together toward their appointed meeting place when the two men came to a crossing deep in mud. In a compassionate moment, Penn offered the older man his arm for support before they attempted to cross the street. History does not record the exact words exchanged but they quickly forgot their disagreement and returned to the hotel without firing a shot—probably exchanging a few toasts afterwards to complete the proceedings.

“In 1780 the British embarked on their attempt to win the Revolutionary War in the South, defeating the American army under General Gates at Camden on August 16, 1780. Colonel Otto Williams, a combatant, gave a vivid description of the desertions and looting that took place: “Leading a torrent of unarmed militia who fled the scene was General Gates and Richard Caswell (a general who later became governor of North Caroline) who fled non-stop on horseback to Charlotte, 60 miles or so away….Another general had his sword stolen from his tent…Another group helped themselves to Caswell’s mess, drinking a pipe of excellent Madeira.”

“On August 23, 1780, at Hillsborough, the General Assembly appointed Penn and two others to the three-man Board of War in North Carolina to prepare for the British invasion. John Penn stepped forward to take charge, when the other two members of the Board proved incompetent. He established effective communication with General Greene (who replaced General Gates), raised recruits, found funding for the military, provided transportation and supplies, disarmed Tories, and generally spurred the people into action.

“John Taylor of Caroline described Penn’s accomplishments during this period: “He (Penn) was surrounded by discouraged friends, helpless citizens, or inveterate foes—but he had a task to discharge—and an arduous one. But nature had formed him for the effort. Indefatigable, cheerful, extremely courteous in his manners, firm in his political principles, and invigorated by an inextinguishable ardor, he went through the crisis with honor to himself, to the satisfaction of the state, and rendered service inestimable to the prosecution of the war.”

“American victories at King’s Mountain and Cowpens, and Greene’s standoff with the British at the Battle of Guilford Courthouse compelled the British Army under Cornwallis to begin a retreat through North Carolina and Virginia that ended with the victory at Yorktown. Jealous perhaps of Penn’s success, and feeling that his actions impinged on his own authority, Governor Burke recalled Penn and persuaded the legislature to abolish the Board of War in 1781.”(DSDI)

Penn proved to be the most active member of the Board; he supplied war materials to Nathanael Greene’s Continentals and Francis Marion’s guerrillas.  As a result of these actions, Penn has been credited for Charles Cornwallis’s ultimate defeat.

Following the American Revolution, the Declaration of Independence signatory was appointed in April 1783 by Robert Morris, another signer of the Declaration of Independence, as North Carolina’s receiver of taxes for the Confederation government.  One month later, however, Penn resigned not given sufficient authority to collect taxes.  Penn then returned to practicing law until his death.

Penn went to the Lord on September 14, 1788. He was buried at his home a few miles northeast of Stovall in Granville County, North Carolina. On April 25, 1894, his remains were re-interred under the Signers Monument, together with the remains of William Hooper, close by the equestrian statue of General Nathaniel Greene at the Guilford Courthouse National Military Park.

In addition to the materials from the Society of the Descendants of the Signers of the Declaration of Independence noted above this post includes details from these Resources:

“John Penn,” American History from the Revolution to Reconstruction and Beyond

2 Responses to John Penn: A Man Who Aided in Cornwallis’s Defeat and Signer of the Declaration of Independence