When Henry VII came to the throne, the York-Lancaster conflict knew an end. Henry earned a monopoly over all gun-powder, which had become the new weapon of warfare. As a result, the power of the monarchy was immeasurably solidified. With the aid of the Court of Star Chamber, Henry held that power.

In 1509, Henry VIII became King, and shortly afterward Thomas Wolsey became his minister. Wolsey carried out the principles of absolutism, and established a peace with France, But Henry was not as eager for an amicable French relationship as was Wolsey, and sent a fleet to ravage the French coast. Wolsey attempted to redirect Henry’s animosity toward Spain, but with little success.

Needless to say, Henry required a divorce from his first wife before he married Anne Boleyn; yet, the Church of Rome held other thoughts. Henry then had himself made head of the Church through an Act of Supremacy. A doctrinal revolution followed. Various injunctions discouraged the practices of masses, pardons, pilgrimages, and the worship of relics. The number of sacraments were reduced, and the ideas of justification by faith and of purgatory were frowned on. The Bible was revised by Miles Coverdale and was made the cornerstone of the faith. The monasteries were pillaged, and high church officials were executed. Among these were More and Fisher. The reign of Cromwell, in short, was a reign of terror.

Bur even Cromwell was not able to check the growing power of Parliament. The King had been forced to retract some of his former anti-Catholic policies, but Cromwell persisted in persecuting the monasteries. He eventually met his end when he opposed Henry’s latest marital project. In 1543, Cromwell was executed and replaced by Norfolk, who favored a union between Henry and the Holy Roman Emperor. Henry found it politic to fling his new minister into the Tower and to replace Norfolk with Hertford, a Protestant. He was Protector when Edward VI succeeded Henry to the throne.

The new government began its reign with the appropriation of religious holdings. The country was wholly without religious uniformity. Agents were sent over the country to stamp out old religious practises, and to imprison those leaders who opposed the new measures. Finally, in 1549 an Act of Uniformity was passed and the Book of Common Prayer made the service for all churches. But peace did not follow. Agrarian distress combined with religious intolerance to inspire Kett’s rebellion, and a second Act of uniformity was required in 1552. A year later, Edward died and was succeeded by Mary.

At first Mary was tolerant in her policies, but when an attempt was made to dethrone her in what is known as Wyatt’s Rebellion (1554), Mary became vengeful. A law of heresy was enacted, and those who refused to return to the Catholic faith were executed. Among those who died at her inquisition were Bishop Latimer and Cranmer. Meanwhile the war with France took a disastrous turn: Revolution would surely have followed, had not Mary died in 1558. 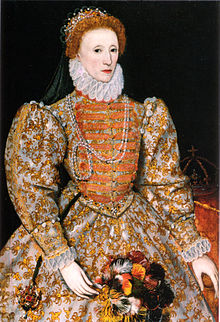 Next, Queen Elizabeth came to the throne. She practised tolerance to gain the favor of all parties. Mary Stuart had a claim to the throne, but Elizabeth disposed of her very easily. With little loss of time, the new queen had the Test Act passed and the thirty-nine articles adopted as the standard of faith. Strife gradually vanished, and the country turned to its other affairs. Commerce and manufacturing flourished, and the nation became more prosperous. In her reign, a new nationalism and literature was born.