Lewis Morris, Lord of Morrisania Manor and Signer of the Declaration of Independence 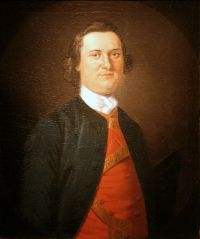 Lewis Morris III was born on April 8, 1726, in Morrisania, New York, into a rich and privileged family. In 1762, upon the death of his father, Lewis inherited the family estate, Morrisania, which covered about 2000 acres, and resembled a small town, with farmers who rented land, blacksmiths, carpenters and others who worked the estate for wages. Lewis attended Yale College, but left without earning a degree. As the eldest son, he was expected to devote his time into running Morrisania. For many years, he would follow the typical pattern of a wealthy gentleman.

In 1749, at age 23, he married Mary Beekman Walton. Together Lewis and Mary had ten children: Catherine, Mary, Lewis, Jacob, Sarah (who died as a child), William, Helena, James, Staats, and Richard.

“As a wealthy landowner, most people expected him to support Britain, but he surprised everyone by supporting the patriot cause. When New York selected its first delegates to the Continental Congress, Lewis Morris was not selected, because he did not support Great Britain. When electing delegates for the Second Continental Congress in May 1775, this time he was elected, since the majority of New Yorkers had changed their minds. During the critical vote for independence on July 2, 1776, Morris was back home in New York, but he attended the NY Convention in White Plains, NY, which approved the Declaration on July 9, and returned to Philadelphia to sign the document after its approval.” (Find a Grave)

So, why would a man who certainly did not suffer from the British actions in the Americas take such a stance? His discontent grew slowly, but steadily. For example, New York housed a large garrison of British troops, who were supposed to protect the American colonies, but the British decided to tax New York citizens to pay for this protection. The New York assembly refused these actions from the Crown, but the New York governor requisitioned the funds without consent. This action upset Morris, and he became quite vocal about the outcome. This was only the beginning of his change of mind.

” To prevent an intercourse between the citizens and the fleet, so injurious to the patriotic cause, timely measures were adopted by the committee of safety; but for a long time no efforts were availing, and even after General Washington had established his headquarters at New York, he was obliged to issue his proclamation, interdicting all intercourse and correspondence with the ships of war and other vessels belonging to the king of Great Britain.

“But, notwithstanding this prevalent aversion to a separation from Great Britain, there were many in the colony who believed that a declaration of independence was not only a point of political expediency, but a matter of paramount duty. Of this latter class, Mr. Morris was one; and, in giving his vote for that declaration, he exhibited a patriotism and disinterestedness which few had it in their power to display. He was at this time in possession of an extensive domain, within a few miles of the city of New York. A British army had already landed from their ships, which lay within cannon shot of the dwelling of his family. A signature to the Declaration of Independence would insure the devastation of the former, and the destruction of the latter. But, upon the ruin of his individual property, he could look with comparative indifference, while he knew that his honor was untarnished, and the interests of his country were safe. He voted, therefore, for a separation from the mother country, in the spirit of a man of honor, and of enlarged benevolence.” (Colonial Hall)

“He served in the Continental Congress from 1775 to 1777, where he worked on the committees that supervised supplies of ammunition and military stores for the Army. During the war, the British burned and wrecked Morrisania. Lewis would spend many years after the war rebuilding his estate. Morris then served in the New York Legislature from 1777 to 1790. He was also a Major General of the New York State Militia during the Revolutionary War. In 1787, Lewis’s brother, Gouverneur Morris wrote much of the final draft of the US Constitution. Lewis attended the convention in Poughkeepsie, NY, to determine if New York would accept the Constitution. Thanks largely to Lewis Morris’s efforts, a narrow vote of 30 in favor to 27 opposed, was achieved, bringing New York into the union as the 11th state.” (Find a Grave)

From the start, Lewis Morris was an active advocate for independence in Congress. In 1776, he was among the 56 men who signed the Declaration of Independence. Lewis Morris’ most famous quote came from a conversation he had with his half-brother, Gouverneur Morris. Gouverneur, a politician and a signatory of the Articles of Confederation, warned him about what would happen if he signed the Declaration and advised him against it. Lewis’s reply was “Damn the consequences. Give me the pen.” With that, he fearlessly scratched his name on the document.

Morris’s three eldest sons followed their father’s example for service to their country. One served for a time as aid-de-camp to General Sullivan, but afterwards entered the family of General Greene, and was with that officer during his brilliant campaign in the Carolinas; the second son was appointed aid-de-camp to General Charles Lee, and was present at the gallant defense of Fort Moultrie, where he greatly distinguished himself. The youngest of these sons, though but a youth, entered the army as a lieutenant of artillery, and honorably served during the war. 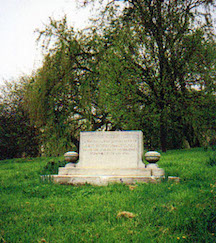 One would find it a bit odd that Morris’s fabulous estate of the late 1700s is now the site of public housing projects and boarded-up buildings. Morrisania was located in what is now the South Bronx, a poverty-stricken neighborhood. The British army trashed the original as retribution for Morris’s stance during the Revolutionary War. An invasion of New York by the British during the war took the British troops right to Morris’s door. The house suffered extensive damage, stands of trees were burned, cattle were slaughtered, and tenants and slaves were run off. Benjamin Rush, another signer of the Declaration of Independence, said of the loss, “[Morris] suffered the loss of many thousand pounds by the depredations of the British arm, upon his property new New York without repining. Every attachment of his heart yielded to his love of his country.”

In 1777, Lewis became a member of the New York Senate. He held this position until 1790. After this Lewis retired to his home and his family. Lewis Morris died on January 22, 1798. he was buried at Morrisania. The family vault can be found in what is known today as the Mott Haven neighborhood of the Bronx. This family vault is in the churchyard of what became St. Ann’s Church of Morrisania and is now known as St. Ann’s Episcopal Church. The manor house stands no more.

2 Responses to Lewis Morris, Lord of Morrisania Manor and Signer of the Declaration of Independence