John Morton, the “Keystone” Signer of the Declaration of Independence

Posted on April 4, 2016 by reginajeffers 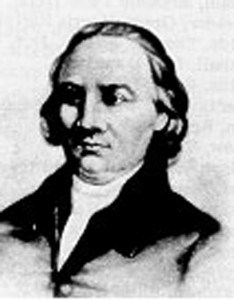 Son of John Morton (Senior) and Mary Archer, John Morton was born in Pennsylvania in 1725. Both sides of Morton’s family came to Pennsylvania from Sweden and Finland. His father passed the same year as John’s birth, and his mother remarried, becoming Mrs. John Sketchley. His stepfather provided John with a well rounded education, including reading, math, surveying skills, and moral training. Morton was known to assist his neighbors with legal matters and property disputes. 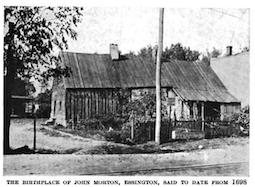 As part of the Pennsylvania Assembly, Morton was a delegate to the Stamp Act Congress, Speaker of the Pennsylvania Assembly, delegate to the First Continental Congress, delegate to the Second Continental Congress. During his service to the delegation to the Second Continental Congress, Robert Morris and John Dickinson absented themselves for proceedings. “With Willing and Humphreys voting ‘nay’ and with Franklin and James Wilson voting ‘aye,’ it fell upon John Morton to cast the deciding vote for independence, and he did so on July 4, 1776. He returned to the statehouse on August 2, to affix his name to the Declaration of Independence. It is said that Pennsylvania, because of John Morton’s deciding vote is nicknamed the “Keystone State”. For without Pennsylvania’s vote for independence the probability of it being adopted was doubtful. In 1776 and 1777 John Morton became Chairman of the Committee of the Whole and was heavily involved in writing the Articles of Confederation, the new nation’s first form of government. Unfortunately, he did not live to see his efforts realized.” (The Society of the Descendants of the Signers of the Declaration of Independence)

According to Denise Kiernan and Joseph D’Agnest in Signing Their Lives Away, “Back home in his district, Morton was unpopular because of what he’d done. A sensitive man, he was said to be deeply affected by his neighbors’ ostracism. About nine months after signing, Morton became sick. His birth and death dates are disputed, but he was probably about fifty-two years old at his death. His historical ‘first’ is a sad one: He was the first signer of all fifty-six to pass away.” He likely died of tuberculosis before the Articles of Confederation were ratified. He was buried in St. Paul’s Burying Ground (also known as the Old Swedish Burial Ground) in the city of Chester, Pennsylvania.

“During his long tenure as a public official of Pennsylvania he was also heavily involved in St. Paul’s Episcopal Church in Chester as well as in the Swedish church. When John Morton died he was buried St. Paul’s Church yard. Two and a half months after Morton’s death on June 18, 1777, Benjamin Rush wrote a letter to Anthony Wayne in which he discussed problems concerning the state’s new Constitution. In that letter he wrote ‘Honest John Morton, your old correspondent, it is said, died of grief at the prospect of the misery he foresaw would be brought upon Pennsylvania by her present form of government.’ Many historians have misinterpreted this quote as a rejection of his [Morton’s] vote for independence as well as his signing of the Declaration of Independence. A careful reading of the entire letter deals with Pennsylvania’s new form of government, and this new government is about which John Morton was referring. Also, there is a claim that John Morton had a death bed scene in which he purportedly said ‘tell them that they will live to see the hour when they shall acknowledge it to have been the most glorious service that I ever rendered my country.’ This alleged quote began to appear sometime in the early 1900’s. However, there is no factual foundation for this alleged quote made by him.” (The Society of the Descendants of the Signers of the Declaration of Independence) Even so, those words are engraved on the obelisk over his grave.

2 Responses to John Morton, the “Keystone” Signer of the Declaration of Independence