It was not uncommon for an English aristocrat or a wealthy man of the gentry to own several properties: country estates and a London house in a fashionable area of London. In doing so, the owner employed a variety of servants to meet the needs of his household, as well as any guests he might entertain. Many took their valuables from their London homes when they returned to their country estates. Gold and silver plate. Chairs and other large furniture placed against the wall and draped with dust covers. Carpets rolled up. Drapes in hessian sacking. Sheets or brown paper over the art work/portraits. A majority of servants in tow. Those left behind to live on board wages in lieu of food.

In the homes, there was a hierarchy of rooms available for the servants. The employer was often forced to supply “better” rooms to meet this hierarchy and an excessive consciousness of rank. The house would, for example, have a butler’s pantry with a specifically constructed repository for the valuable plate and a separate scullery if the plate was frequently in use. The butler would have a separate bedroom.

The housekeeper would have a parlour of sufficient space to store all her homemade biscuits and preserves, as well as some of the china and glassware stored a china closet. Upper servants might eat in this parlour. Likely, a stillroom would be attached. In Victorian times, this room would have a lead sink, table, confectioner’s oven, etc., to make the cakes and biscuits. A room to store groceries may have been close by. This would need to be cool so food would not spoil. 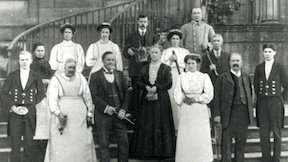 A lady’s maid would also require her own separate sitting room. There would be a place for sewing and ironing clothes. Some houses would have a separate room for brushing the dirt from the clothes, a knife room, a shoe room, a lamp room, etc. 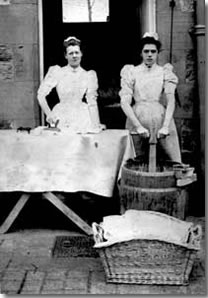 In the servants’ hall, one would find an area for the servants to eat. The men’s quarters were separate from the women’s. These might be separate rooms or partitioned dormitories. The maids often slept two to a room in the attic. The butler, house steward, the cook, the lady’s maid(s), and the valet would have their own rooms. If guests were in the house, separate rooms would be required for equivalent servants traveling with his master. 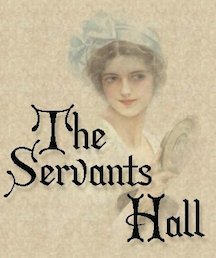 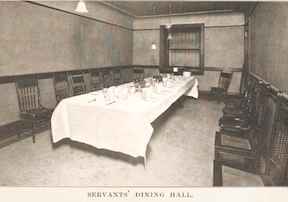 Household management and Servants of the Victorian Era http://www.avictorian.com

At the beginning of Queen Victoria’s reign, it was estimated that a gentleman would require £2500 to £3000 to support his staff. According to Frank E. Huggett’s Life Below Stairs (page 20), “…the estimated household expenses of the fourth Earl of Ashburnham were £2742 a year, say thirteen to eighteen times the salary of a country curate or one and twenty times the wages of a farm labourer. Of the total, £769 went on wages and house labour, £200 on servants’ beer and another £138 on liveries and hats, about 40 per cent in all. Despite the agricultural depression which breathed coldly on the fortunes of many landed proprietors in the 1870s and even more icy blast of estate duties some twenty years later, many of them continued to retain their fortunes – and their large staff of servants – to the end of the reign. The Duke of Westminster, who was one of the richest men in England, and the sixth Duke of Portland, each employed about three hundred servants, about the same number as the Queen herself, who had a separate staff of Indian cooks just to prepare a curry lunch each day whether anyone wanted to eat it or not. Some of the incredible waste in the royal kitchens is recalled by Gabriel Tschumi, who became an apprentice at Buckingham Palace in 1898. Dozens of pheasants, salmon, sturgeon, trout, foie gras, soufflés made with four or five dozen eggs all found their way from time to time into the rubbish bins in the cause of gastronomic perfection. A year before he started working there, twenty-four extra cooks had been brought from France to prepare the fourteen-course banquet in celebration of the queen’s diamond jubilee; the main course rosettes de saumon au rubis (cold salmon in claret jelly) had to be made three times before it received the approval of the Royal chef.”

2 Responses to Life Below Stairs: Part 6 ~ Housing the Servants