Victoria’s Path to the Throne

In our last posting of the Line of Succession, we made note that Princess Alexandrina Victoria made an appearance into the world on 24 May 1819, three days before her cousin, Prince George Frederick Alexander Charles Ernest Augustus (Prince George of Cumberland), giving her precedence in the line of succession. When she was but eight months of age, her father passed; therefore, the opportunity for Edward Augustus, Duke of Kent, to sire a son who would usurp Victoria’s claim to the throne did not occur. Six days after Kent died, his father King George III, finally passed. Prince George came to the throne as George IV.

(Image of Frederick, Duke of York) In 1827, Frederick, Duke of York, was the second son of George III and Queen Charlotte. He  became heir presumptive to the British throne on the death of his father in 1820 but never became king because he died before his older brother, George IV. Frederick died of dropsy and apparent cardio-vascular disease. Three years later, George IV died. George IV (George Augustus Frederick; 12 August 1762 – 26 June 1830) was King of the United Kingdom of Great Britain and Ireland and of Hanover following the death of his father, George III on 29 January 1820 until his own death in 1830.

“George’s heavy drinking and indulgent lifestyle had taken their toll on his health by the late 1820s. Through huge banquets and copious amounts of alcohol, he had become obese, making him the target of ridicule on the rare occasions that he appeared in public. By 1797 his weight had reached 17 stone 7 pounds (111 kg; 245 lb), and by 1824 his corset was made for a waist of 50 inches (130 cm). He suffered from gout, arteriosclerosis, peripheral edema (‘dropsy’), and possibly porphyria. In his last years, he spent whole days in bed and suffered spasms of breathlessness that would leave him half-asphyxiated.

(Image of George III) “By December 1828, like his father, he was almost completely blind from cataracts, and was suffering from such severe gout in his right hand and arm that he could no longer sign documents. In mid-1829, Sir David Wilkie reported the King ‘was wasting away frightfully day after day,’ and had become so obese that he looked ‘like a great sausage stuffed into the covering.’ The King took laudanum to counteract severe bladder pains, which left him in a drugged and mentally handicapped state for days on end. In 1830 his weight was recorded to be 20 stone (130 kg; 280 lb).

“By the spring of 1830, George’s imminent end was apparent. Attacks of breathlessness due to dropsy forced him to sleep upright in a chair, and doctors frequently tapped his abdomen to drain excess fluid. He was admired for clinging doggedly to life despite his obvious decline. He dictated his will in May and became very devout in his final months, confessing to an archdeacon that he repented of his early dissolute life, but hoped mercy would be shown to him as he had always tried to do the best for his subjects. At about half-past three in the morning of 26 June 1830 at Windsor Castle, he reportedly called out ‘Good God, what is this?’, clasped his page’s hand and said ‘my boy, this is death,’ after which he died. An autopsy conducted by his physicians revealed he had died from upper gastrointestinal bleeding resulting from the rupture of a blood vessel in his stomach (gastric varices). A large tumour “the size of an orange” was found attached to his bladder, and he had an enlarged heart surrounded by a large fat deposit and heavily calcified heart valves.” (George IV of the United Kingdom) 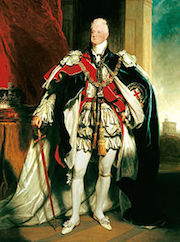 (Image of William IV) George III’s third son followed his older brother to the throne on 26 June 1830 until his death on 20 June 1837. He was the last king and penultimate monarch of Britain’s House of Hanover. By the time that Clarence came to the throne, it was not likely that his Queen Adelaide would produce more children. His children were Princess Charlotte Augusta Louisa of Clarence (who died a few hours after being baptised on 27 March 1819); a stillborn child on 5 September 1819; Princess Elizabeth Georgiana Adelaide of Clarence (10 December 1820 to 4 March 1821); stillborn twin boys (8 April 1822). Ironically, many of Clarence’s illegitimate children survived and thrived.

With William IV’s passing in 1837, Victoria’s path to the throne opened before her. Victoria was the first sovereign queen in over 120 years – not since Anne Stuart. There were concerns for Victoria’s future as queen. It was thought that her mother, Victorie, Duchess of Kent, kept a lover, her “adviser,” Sir John Conroy. The fear was that the two would control Victoria until she turned eighteen.

According to the law of the land, a monarch at age 18 could rule alone without a supplementary regent required for a minor child. The very ill William IV set his sights on surviving until May 1837 in order to keep Victorie, the Duchess of Kent (who was named regent-designate for her minor daughter), and Conroy from exercising power over Kent’s daughter.

Thankfully, William lived long enough for Victoria to turn 18. Her accession came only days after her birthday. Moreover, Victoria had no care for Conroy, and she forbid Conroy any say in how she would conduct herself as Britain’s sovereign.

From Wikipedia, we find…

4 Responses to Victoria’s Path to the Throne