Robert Treat Paine, “The Objection Maker” and Signer of the Declaration of Independence 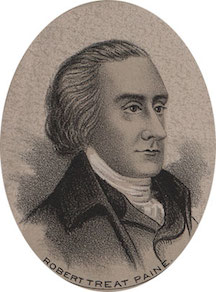 “Robert Treat Paine was a native of Massachusetts, born in 1731. He was expected, by family tradition, to become a Minister. He got high marks at the Boston Latin School and was admitted to Harvard College, where he graduated in 1749. He taught school for a while and then began the study of theology. Because of his frail health, Paine set out to build up his strength by working on the sea. He spent some years as a merchant marine visiting the southern colonies, Spain, the Azores, and England. When he returned home he decided to pursue the law. He was admitted to the bar of Massachusetts in 1757. He first set up office in Portland, Maine (then part of Massachusetts) and later relocated to Taunton, Massachusetts. In the trials of British soldiers following the Boston Massacre, Paine served as associate prosecuting attorney.” (Signers of the Declaration of Independence)

“Unusual in his generation in New England for having a middle name, Robert Treat Paine was the namesake of Robert Treat, father of Samuel, who was governor of Connecticut for many years and a founder of Newark, New Jersey. Paine’s great grandfather, Reverend Samuel Willard, Harvard College 1659, had been the second minister of the Old South Church and vice president as well as acting president of Harvard College. Paine was a sixth-generation descendant of Stephen Hopkins, the only passenger on the Mayflower who had also lived in Jamestown, Virginia, and a signer of the Mayflower Compact.

Paine has an impressive family history in the old world as well as the new. Through his great-grandmother Rebecca Winslow he was reportedly descended from William the Conqueror, Charlemagne, Alfred the Great and Magna Carta Baron Saire de Quincy. It is now believed that Robert Treat Paine’s great grandfather Thomas Paine of Yarmouth and Eastham, Cape Cod, a millwright prominent in community and colony affairs and born in 1612, emigrated from England in 1635 with his wife Elizabeth and was the son of Queens College Cambridge-educated vicar Thomas Payne of Hernhill, Kent, whose family hailed from Great Yarmouth, Norfolk, in East Anglia.

“Reverend Thomas Paine had left full-time ministry in 1730 when he moved the family to Boston and eventually entered business as a merchant. He continued to preach from time to time in Weymouth until 1734. In his new calling as a merchant, he initially prospered.

“Finishing Boston Latin School at the top of his class, Robert Treat Paine entered Harvard College at the age of fourteen. Besides forming a literary club with friends, he had a great interest in scientific matters, went “to see the Electricity” and became interested in clock making. Paine lived with the college chaplain, Reverend Nathaniel Appleton. Unfortunately, just as he was graduating from college in 1749, his father lost his fortune, and he was left to make his own way in life.

“After teaching school for a year in Lunenburg, Massachusetts, and then in Boston, he made three voyages to North Carolina in 1751-54, acting as master, and in the last sailed as far as Fayal and Cadiz. In Philadelphia between voyages he met many influential people and was particularly intimate with the Franklins. While in North Carolina he wrote President Holyoke of Harvard asking to be awarded the Masters of Arts degree in absentia; his request was granted. In 1754, as Captain of the Seaflower, he led a whaling expedition from Cape Cod to Greenland and left behind what is believed to be the earliest illustrated log of a whaling venture kept by an American. Unfortunately, none of his mercantile ventures proved to be rewarding.

“In 1755, he commenced reading law with his relative Judge Samuel Willard in Lancaster, Massachusetts, and while pursuing his studies preached at Shirley. When Willard was appointed Colonel for the Crown Point (New York) expedition during the French and Indian War, Robert Treat Paine served as a chaplain of the regiment and encamped at Lake George for three months at the end of 1755.

“In early 1756 Paine visited his father in Halifax, Nova Scotia, in August went to Connecticut on family business, and by the fall moved to Boston to resume study of the law under Benjamin Prat, later chief justice in New York. In 1757, Paine was admitted to the Massachusetts Bar, the same month that his father died, leaving behind debts to collect from Nova Scotia and the West Indies and heavy family responsibilities. At first he considered establishing his law practice in Portland, Maine (then Massachusetts), but settled in Boston. He frequently rode the circuit attending court sessions in Cambridge, Plymouth, Barnstable and Worcester, York and Portsmouth. Pushing himself at some cost to his health, Paine qualified for practicing before the Superior Court in 1758. He and fellow lawyer John Adams were already keen rivals.

“In 1761 Paine moved to Taunton, Massachusetts, where he almost immediately became a leading citizen, justice of the peace in 1763, barrister in 1764. There he resided for twenty years. His attendance of regional court sessions on the circuit continued unabated. He was respected as a fair man with an admirable dedication to his profession and devotion to his community, which repeatedly elected him Town Moderator. Paine was tall in stature, blessed with a deep voice and a serious and frank manner. His great powers of mind, profound knowledge of the law and habits of thorough investigation quickly brought him a large practice, with important clients, among them the painter John Singleton Copley.

“In 1766 at age thirty-five he ‘began to visit Sally Cobb’ of Taunton, then twenty-two. Born on May 15, 1744, Sally was the daughter of Thomas Cobb, Esq., an iron manufacturer, tavern keeper and former sea captain, and Lydia (Leonard) Cobb, and a sister of David Cobb, who was later a General and aide on the staff of George Washington. After seeing each other for four years, on March 15, 1770 the couple married at the octagonal Cobb family house called ‘the Chapel’ in Attleborough. They subsequently lived across from Taunton Green in a house built in 1771. The couple were the parents of eight children.” (The Society of the Descendants of the Signers of the Declaration of Independence)

“In 1768 he was a delegate to the provincial convention which was called to meet in Boston and along with Samuel Quincy conducted the prosecution of Captain Thomas Preston and his British soldiers following the Boston Massacre of March 5, 1770. John Adams was opposing counsel, and his arguments won the jury’s sway, and most of the troops were let off.” (Robert Treat Paine) No match for Adams, Paine argued for the legal duty to respond to the provocation. Captain Preston and six of his 8 men were acquitted. Two were convicted of manslaughter. They were not hanged but rather branded with an “M” on their thumbs. Bostonians used the loss as further proof of the Crown’s subjugation. Paine was considered a hero for his stance against the British government.

“Paine served in the Massachusetts General Court from 1773 to 1774, in the Provincial Congress from 1774 to 1775, and represented Massachusetts at the Continental Congress from 1774 through 1776. In Congress, he signed the final appeal to the king (the Olive Branch Petition of 1775), and helped frame the rules of debate and acquire gunpowder for the coming war, and in 1776 was one of the signers of the Declaration of Independence.” (Robert Treat Paine) His fellow Congressmen thought him jovial, but Paine was criticized for not putting forth new ideas. He was often heard opposing other’s ideas, to the point he was given the nickname of “The Objection Maker.” Benjamin Rush wrote of him: “He had a certain obliquity of understanding which prevented his seeing public objects in the same light in which whey were seen by other people.” (Denise Kiernan and Joseph D’Agnest, Signing Their Lives Away, Quirk Books, 2009, page 44)

(Statue of Robert Treat Paine (1904), Taunton, Massachusetts ~ Public Domain) “He returned to Massachusetts at the end of December 1776 and was speaker of the Massachusetts House of Representatives in 1777, a member of the executive council in 1779, a member of the committee that drafted the state constitution in 1780. He was Massachusetts Attorney General from 1777 to 1790 and prosecuted the treason trials following Shay’s Rebellion. In 1780, He was a charter member of the American Academy of Arts and Sciences. He later served as a justice of the state supreme court from 1790 to 1804 when he retired. When he died at the age of 83 in 1814 he was buried in Boston’s Granary Burying Ground. A statue to commemorate him was erected in the Church Green area of Taunton.” (Robert Treat Paine) 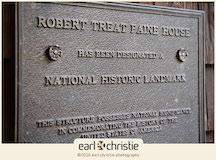 Regina Jeffers is the award-winning author of Austenesque, Regency and historical romantic suspense.
View all posts by reginajeffers →
This entry was posted in Uncategorized. Bookmark the permalink.
Loading Comments...
%d bloggers like this: