“I Won’t Dance, Don’t Ask Me” – Dance as a Plot Device in Jane Austen’s Novels

Posted on February 18, 2016 by reginajeffers 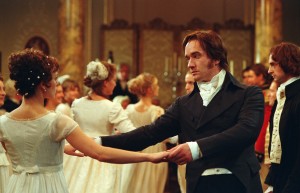 “To be fond of dancing was a certain step towards falling in love.” (Pride and Prejudice, Chapter 3) During Austen’s time, young people looked for a potential mate at dances. Austen, herself, enjoyed a good dance, and, therefore, she often used dance as part of her plot line. In a 1798 letter to her sister Cassandra, Austen wrote, “There were twenty Dances & I danced them all, & without any fatigue.” Dancing well was a “necessary evil.” Those who trod on their partners toes (i.e., Mr. Collins) were seen as gauche. Children of the gentry learned the latest dance steps early on.

Public balls or assemblies and private balls formed the two types of formal dances. Assemblies took place in large ballrooms in market towns and cities. They were constructed for the purpose of public gatherings. One might also hold a dance in the ballrooms at country inns (as in the Crown Inn in Emma) or in formal ballrooms in large houses (as in the Netherfield Ball in Pride and Prejudice or Sir Thomas’s ball in Mansfield Park).

Occasionally, the gentry would roll up the rugs for an impromptu dance. These were more characteristic of country life. 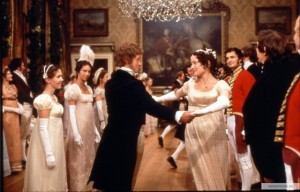 Characters discussing “dancing” and participating in “dance” occurs often in Austen’s story lines. From Pride and Prejudice, we find, “Elizabeth Bennet had been obliged, by the scarcity of gentlemen, to sit down for two dances…” (and) “Come, Darcy,” said he, “I must have you dance. I hate to see you standing about by yourself in this stupid manner. You had much better dance.” (as well as) “She had known him only a fortnight. She danced four dances with him at Meryton…”

“Every savage can dance.” Sir William only smiled. (and)

“You would not wish to be dancing when she is ill.” (and)

“…and Elizabeth thought with pleasure of dancing a great deal with Mr. Wickham…” In fact, Austen uses “dance” eight and sixty times during the story line. 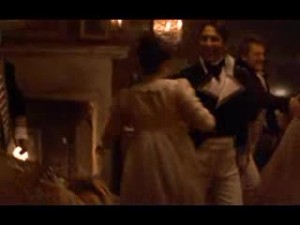 From Persuasion, the reader finds these references to “dancing.”

“The girls were wild for dancing; and the evenings ended, occasionally, in an unpremeditated little ball.” (and) “This evening ended with dancing.” (as well as) “Oh, no; she has quite given up dancing.” (and)

“Yes, I believe I do; very much recovered; but she is altered; there is no running or jumping about, no laughing or dancing…” There are ten references to dance in Persuasion. 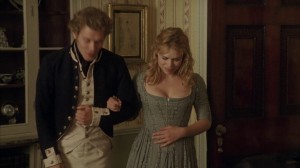 The reader comes across nine and forty mentions of the word “dance” in Mansfield Park. We have such gems as, “…for it was while all the other young people were dancing, and she sitting, most unwillingly, among the chaperones at the fire…” (and) “…been a very happy one to Fanny through four dances, and she was quite grieved to be losing even a quarter of an hour.” (as well as) “…but instead of asking her to dance, drew a chair near her, and gave her an account of the present state of a sick horse…” (and) “I should like to go to a ball with you and see you dance. Have you never any balls at Northampton? I should like to see you dance, and I’d dance with you if you would, for nobody would know who I was, and I should like to be your partner once more.” 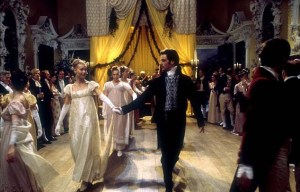 “Dancing” is mentioned nine and sixty times in Emma. “She was in dancing, singing, exclaiming spirits…” (and) “She had suffered very much from a cramp from dancing, and her first attempt to mount the bank brought on such a return of it as made her absolutely powerless…” (and) “Indeed I will. You have shewn that you can dance, and you know we are not really so much brother and sister as to make it at all improper.” (as well as) “Pleasure in seeing dancing! – not I, indeed – I never look at it – I do not know who does. Fine dancing, I believe, like virtue, must be its own reward.”

From Love and Freindship, one finds, “The Dancing, however, was not begun as they waited for Mis Greville.” (and) “I soon forgot all my vexations in the pleasure of dancing and of having the most agreeable partner in the room.” (as well as) “I can neither sing so well nor Dance so gracefully as I once did.” There are ten references to “dance” in Love and Freindship. 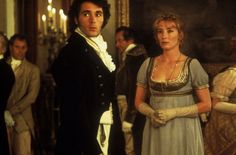 One and twenty references to “dance” appear in Sense and Sensibility. They include: “In the country, an unpremeditated dance was very allowable…” (and) “Never had Marianne been so unwilling to dance in her life…” (and) “They speedily discovered that their enjoyment of dancing and music was mutual…”

Seven and sixty uses of “dance” can be found in Northanger Abbey. One can find, “He wants me to dance with him again, though I tell him that it s a most improper thing, and entirely against the rules.” (and) “Oh, no; I am much obliged to you, our two dances are over; and, besides, I am tired, and do not mean to dance any more.” 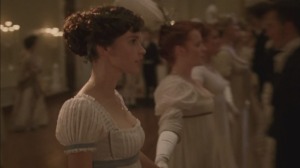 My favorite quote regarding dancing comes from Northanger Abbey. In it, Henry Tilney makes a comparison between “dancing” and “matrimony.” He says, “…that in both, it is an engagement between man and woman, formed for the advantage of each; and that when once entered into, they belong exclusively to each other till the moment of its dissolution; that it is their duty, each to endeavor to give the other no cause for wishing that he or she had bestowed themselves elsewhere, and their best interest to keep their own imaginations from wandering towards the perfections of their neighbours, or fancying that they should have been better off with any one else.” 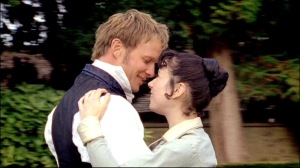 9 Responses to “I Won’t Dance, Don’t Ask Me” – Dance as a Plot Device in Jane Austen’s Novels