Robert Morris, Signer of the Declaration of Independence and America’s First True Capitalist

Born to an ironworker from Liverpool, England, Robert Morris’s childhood was anything but quiet. His mother died when he was two. His father, Robert Morris, Sr., came to Maryland in 1738 as an agent for Foster, Cunliffe, and Sons for whom he purchased and shipped tobacco to England.  “He was the originator of the tobacco inspection law, and had it passed over powerful opposition. He was considered a mercantile genius, and was the first to keep his accounts in money rather than in gallons, pounds, yards, etc. In 1750 Robert Morris, Sr., gave a dinner party on board one of the ships of the company. As he left the ship in a small boat, a farewell salute was fired from the ship and wadding from the shot burst through the side of the boat and severely injured him. As a result of the accident, he died of blood poisoning on July 12, 1750.” (The Society for the Descendants of the Signers of the Declaration of Independence)

Raised by his maternal grandmother, Robert Morris, Jr., did not arrive in America until 1748. Unlike many of his fellow signers, Morris had little formal education. He apprenticed at Charles Willing & Co. as a clerk, but when his father died, he was 16 and alone in a country he knew little of. Eventually, Morris saved enough to open the London Coffee House in Philadelphia. During the Seven Years War (1756-1763) he captained a ship on a trade mission to Jamaica, where French Privateers took him and his crew captive. Eventually, he was able to escape and made it to Cuba, where he remained until an American ship returned him to Philadelphia.

After Charles Willing’s retirement, Morris and Thomas William began a partnership. Their ships traveled to the West Indies and England, importing and exporting goods. They also banking interests. “At the height of his success, he was ranked by the Encyclopedia of American Wealth, along with Charles Carroll of Carrollton, as the two wealthiest signers among the 56 signers of the Declaration.” (The Society of the Descendants of the Signers of the Declaration of Independence) Robert is known to have led a street protest agains the 1765 Stamp Act. He and Willing organized the first non-importation of slaves agreement in 1769. 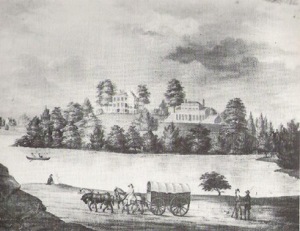 After he married Mary White in 1769, Morris purchased 80 acres on the eastern bank of the Schuylkill River, a beautiful estate he named “The Hills.” As the warden of the port of Philadelphia, Morris stopped the chaos that was the Boston Tea Party by convincing tea ships to return to England. He and Willing furnished the militia with weapons and powder. So many supplies arrived at Morris’ wharfs that Congress placed special guards there to protect the colonial supply line. Although he supported the colonial efforts, Morris was not sold upon the idea of separation from England. He did think the colonies were prepared for self rule and that anarchy would ensue. (The Society of the Descendants of the Signers of the Declaration of Independence) It is reported that Morris excused himself from the room when the vote for independence came on 2 July 1776. 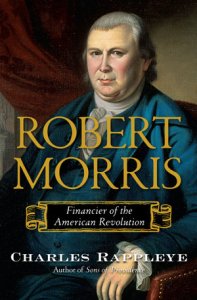 In Charles Rappleye’s Robert Morris: Financier of the American Revolution (Simon & Schuster), we learn that “Morris was thinking in terms of global commerce at the same time the Scottish economist Adam Smith was describing it in The Wealth of Nations. The primary [means of finance] for the international traders [were] called ‘bills of exchange,’ which were debts and foreign currencies that you could then buy and sell in foreign capitals, and in your own country, to other traders who needed capital. A lot of it was based on personal relationships, so correspondence was critical and reputation was fundamental. During the Revolution, Morris use chis reputation and business connections to effectively bankroll American forces. He was active in supplying Washington’s army with gunpowder, which he smuggled in under the noses of British authorities in Europe and the Caribbean.

“‘He was getting the cattle from Connecticut, he was getting the flour from Pennsylvania and Virginia, and he was getting it all to the soldiers on the road.’ Before Yorktown, the United States’ fledgling new currency had all but failed, and the only medium of exchange with which to finance to revolution was Morris’ own personal credit. So four years after opposing the Revolution, Morris had effective become America’s treasury and banker.”

According to The Society of the Descendants of the Signers of the Declaration of Independence, “In 1779 Thomas Paine and Henry Laurens delivered charges of fraudulent transactions against Willing and Morris. Morris demanded that a congressional committee examine his books, and he was exonerated. The committee reported ‘that (Robert Morris)…has acted with fidelity and integrity and an honorable zeal for the happiness of his country.’

“The Continental Congress called Morris to service again, in 1781, appointing him the Superintendent of Finance. This was the first executive office in American history.

“Faced with a serious governmental financial crisis, Morris submitted the first national funding proposal, On Public Credit, which served as the basis for Hamilton’s plan submitted a decade later during the Washington Administration. Morris established the Bank of North America with the help of two other signers—James Wilson and George Clymer. Morris slashed governmental and military expenditures, personally purchased Army and Navy supplies, tightened accounting procedures, and pleaded with the states to contribute, a process he likened to ‘preaching to the dead.’ Before he left office he used over a million dollars in his own notes to feed and pay the troops, with most of those notes to be repaid with loans from France. At the end of the war he took on the mission of repaying the debt to France, but circumstances made that impossible and he lost a fortune in the effort.”

“He personally put up 1.4 million dollars for the effort and coordinated with the French to get French ships into the Chesapeake, which made the planned evacuation of the British army impossible.

“Robert Morris sent the first American ship to China in 1784 which began the country’s China Trade. At one point he had ships going as far as the Levant and India. Morris confided to an old friend that he had lost over 150 ships during the Revolution, but had managed to come out “about even.” This was mostly due to privateering, and selling American goods to the French and Spanish islands in the Caribbean.

“Robert Morris had become a strong advocate of a more powerful government and attended the Annapolis Convention in 1786 to discuss amending the Articles of Confederation. In 1787 he hosted George Washington as they both attended the Constitutional Convention in Philadelphia, and it was Morris who nominated Washington to be Chairman of the Convention. Morris signed the new U. S. Constitution, one of only two signers of the Declaration of Independence to sign all three basic founding documents—the Declaration, the Articles of Confederation and the U.S. Constitution. (The other signer of all three documents was Roger Sherman of Connecticut.)”

3 Responses to Robert Morris, Signer of the Declaration of Independence and America’s First True Capitalist