Another Signer of the Declaration of Independence, Thomas Nelson, Jr., Descendant of Edward III

Posted on December 28, 2015 by reginajeffers

I hope you are enjoying this series on the signers of the Declaration of Independence as much as I. Many of these men held deeps roots to family in England. Thomas Nelson of Virginia was one such man. His grandfather William Nelson was from Cumbria, and Thomas was educated at first Eton and then Cambridge. 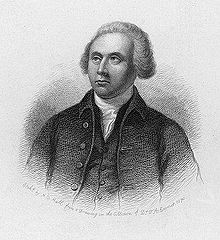 Here are the basics of Nelson’s life from the Virginia chapter of  The Daughters of the American Revolution website: “General Thomas Nelson, Jr., was one of the signers of the Declaration of Independence and a member of the Continental Congress. He was born December 26, 1738, at Yorktown, Virginia. He married Lucy Grymes on July 29, 1762, and they had eleven children. Thomas Nelson died January 4, 1789, at “Offley,” Hanover County, Virginia, and was buried in the cemetery of Grace Episcopal Church in Yorktown.

“Thomas Nelson entered Eton College in England when he was fourteen years old and was subsequently graduated from Cambridge. He was an active member of the State Constitutional Convention and was elected Governor of Virginia in 1781. He commanded the Virginia Militia at the siege of Yorktown. According to family legend, General Nelson directed fire against his own house because he believed it served as headquarters of General Cornwallis. It was there on October 19, 1781, that General Cornwallis surrendered.

“The following is the inscription on his tomb: 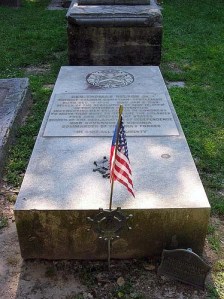 Gen. Thomas Nelson, Jr.
1738-1789
Patriot, Soldier, Christian Gentleman Mover of the Resolution of May 15, 1776 in the Virginia Convention, Instructing her Delegates in Congress to move that body to Declare the Colonies Free and Independent States. Signer of the Declaration of Independence, was Governor of Virginia, Commander of Virginia Forces. He gave all for Liberty.”

Born to a wealthy family, after receiving his education in England, Nelson returned to America to join his father in the management of the family’s plantation, but eventually he moved into the mercantile business. In the House of Burgesses, Nelson supported anti-British causes because he thought England exercised a “savage” and “absurd” war against the colonies.

The Royal Governor Lord Dunmore disbanded the House of Burgesses because of their “American” bent, but the men involved simply moved their their meetings to Williamsburg’s Raleigh Tavern.

Nelson and some of his companions staged the Yorktown Tea Party of 1774, an action taken against the British ship Virginia. “On November 7, 1774, residents of York County threw a “tea party,” reminiscent of the Boston Tea Party of 1773, when they boarded the ship Virginia and dumped two half-chests of tea into the York River. The first Virginia Revolutionary Convention that met in August of that year had adopted a resolution to refuse to purchase English goods or consume tea, hoping to pressure English merchants to persuade Parliament to repeal tax laws and regulations that Virginia leaders believed to be unconstitutional. The tea that reached Yorktown in November was en route from the London mercantile firm of John Norton and Sons for the Williamsburg merchants John Prentis and Company. The men in Yorktown acted after growing impatient waiting for guidance from a committee in Williamsburg. They did not damage the ship or any other cargo; they only dumped the tea. Later, committees in York and Gloucester Counties condemned Norton, Prentis, and the ship’s captain for violating the Virginia boycott. They ordered the ship not to load any tobacco for shipment to England but to return to England empty.” (Education Library of Virginia) One must recall this was more than a bit of overzealousness on behalf of the colonists: This was a punishable crime if caught.

“Nelson was chosen as a delegate to the Continental Congress in 1775. In May 1776, the month Virginia delegates seized control of the royal government, Nelson made a motion to declare independence from Great Britain. His fellow Virginians approved the resolution. An enthusiastic Nelson carried the good news to Philadelphia, granting Richard Henry Lee permission to present his now famous resolution for colony-wide independence on June 7, 1776.” (Denise Kiernan and Joseph D’Agnese, Signing Their Lives Away)

One of the personal issues Nelson faced was his extreme bouts with asthma, a disease that eventually killed him. Even so, Nelson was dedicated to his causes and his country. He served as Virginia’s governor, succeeding Thomas Jefferson to the office tin 1781. Nelson did so without withdrawing from his duties as a brigadier general in the Virginia militia and served as a commander of the militia at the siege of Yorktown.

There are tales of Nelson ordering his own house burnt to the ground to destroy the headquarters of British General Cornwallis. In reality, the house being used by Cornwallis was his uncle’s house, another Thomas Nelson. Even so, Nelson ordered his men to seize his house from the British. “In the fall of 1781, General Nelson led 3,000 Virginia Militiamen as part of George Washington’s Army besieging Yorktown. When the British took refuge in his home, American artillerymen refused to fire on the house, in respect to General Nelson. Nelson then aimed and fired a cannon at his own home, and ordered the men to fire at his house, destroying it. The British surrendered at Yorktown on October 19, 1781, marking the end of the major fighting in the American Revolution.” (Geni.com)

Nelson made lots of loans to the new nation’s government, which drained much of his personal fortune. He sold much of his land and many of 400 slaves to pay the notes for America. He even included the struggling nation in his last will, including sources to pay off remaining debts.

Thomas Nelson Jr. was a descendant of the Plantagenet house through Edward III of England. His descendants live on currently in the nation he helped to found. (Descendants of Edward III) (Wikipedia)