What Does a Popular Party Game Have in Common with William Ellery, Signer of the Declaration of Independence?

Posted on December 22, 2015 by reginajeffers

After the successful piece on William Floyd, I thought I might look at some of the others signers of the Declaration of Independence. After all, I have plenty of research on the period lying around. Perhaps it might lead another to know more of his/her heritage. Therefore as this is the 288th anniversary of the birth of William Ellery, I am carrying on.

So what do we know of Ellery? First, let’s do a quick summary via Signers of the Declaration of Independence from USHistory.org. “William Ellery was born at Newport, Rhode Island, in December of 1727. Under the tutelage of his Prominent father, Benjamin Ellery, he attended Harvard College and graduated at the age of 15. He searched for the right career for many years, worked as merchant, then a collector of customs, and later as the Clerk of the Rhode Island General Assembly. He began to practice law in 1770 at the age of 43, that he seemed to find his calling. He was active in the Rhode Island Sons of Liberty, and was sent to the Continental Congress in 1776 to replace Samuel Ward, who had died. He was immediately appointed to the Marine committee and later participated in several others including the committee for foreign relations. Meanwhile he held the office of judge of the Supreme Court of Rhode Island. In 1785 he became a strong and vocal advocate for the abolition of slavery. He was appointed First (customs) Collector of the port of Newport, under the provisions of the Federal Constitution, where he served until his death in February of 1820.”

Famous People Born Today gives us a biography and many trivia facts, “William Ellery was a merchant-cum-lawyer who along with Stephen Hopkins signed the famous U.S. Declaration of Independence on behalf of Rhode Island. Rhode Island was one of those colonial states that had not faced as much oppression at the hands of the British government as had other states such as Massachusetts and New York. Therefore, the patriotic passion of those from Rhode Island did not run as high as compared to others from the more oppressed states but the representatives of the state were in support of the American Revolution. Even though William Ellery was a late entrant into the political field, yet he played a significant role in the revolution. He began his career as a merchant and then entered public service after being appointed a customs collector. He went on to become a Clerk of the Rhode Island General Assembly where he gained knowledge about legal procedures and deeds. He decided to put this new found knowledge to good use and started studying law. He became a lawyer quite late in life: at the age of 43. By this time he also started participating actively in political activities by getting involved with the Sons of Liberty. He represented Rhode Island in the Continental Congress and signed the Declaration of Independence in 1776.”

Ellery married young and sired some sixteen children between his two wives. Not all lived to maturity, but Ellery’s house was customarily full. Because of his large number of dependents, Ellery was 40 when he finally was able to abandon his numerous other jobs and to study law. Ironically, when it came to being chosen to represent Rhode Island at the Second Continental Congress, Ellery was not the colony’s first choice. Originally, Stephen Hopkins and Samuel Ward were chosen as the representatives, but Ward took ill with smallpox and never recovered. Enter #3: William Ellery.

From Signing Their Lives Away from Denise Kiernan and Joseph D’Agnese, we learn,”Ultimately, Ellery, a self-described ‘dabbler,’ did not gain much fame or popularity outside his state. But he lives on in history as the man who sat and watched. He famously chose to bear witness as his fellow signers put quill to the Declaration of Independence, presumably on August 2, 1776. ‘I was determined,’ he alter reported, ‘to see how they all looked as they signed what might be their death warrant. I placed myself beside the secretary Charles Thomson and eyed each closely as he affixed his name to the document. Undaunted resolution ws displayed in every countenance.” 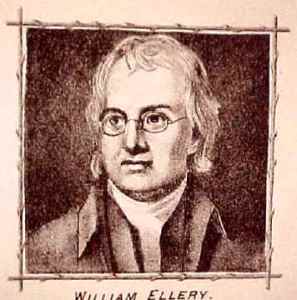 **He started his career as a merchant, working alongside with his father in his business. He learnt about the prevalent practices in trade and shipping.
**He became a Naval Officer of the Colony of Rhode Island on the basis of the shipping knowledge he had. After a short stint, he became a Master Mason in the First Lodge in Boston.
**In 1750, he became a Clerk of the Court where he learnt about legal practices and procedures. He served in this position till 1763.
**He helped in co-founding the Rhode Island College in 1764 in his city and acted as one of its incorporators.
**When The Stamp Act, which imposed a tax on the colonies of British America, was passed in 1765, it was met with wide spread opposition by the patriots. Ellery, along with others, led a march in Rhode Island to resist the Act.
**He decided to expand the legal knowledge he had gained while working as a clerk in the court and started studying law. He cleared the exams and was accepted into the Bar in 1770.
**In the 1770s, he also became active in the Sons of Liberty, a group of patriots who were engaged in the protection of the rights of the colonists.
**The British government passed certain disciplinary laws in 1774 which took away from the Massachusetts many of its government and historic rights. These laws were dubbed “Intolerable Acts” and were vehemently opposed by the colonists. Ellery played a significant role in the resistance movement.
**By the fall of 1774, emotions, regarding the demand for independence from British rule, were running high in the First continental Congress. Ellery, though not a congress member, was strongly in favour of independence and believed that the colonies were capable enough to govern themselves.
**As a lawyer, he was acquainted with several influential people in Rhode Island, and had the means to gather vital information about the British Parliament. He was really frustrated with the way the British were governing America with little concern for the welfare of the people.
**By 1775, the American Revolution had already begun, and the Second continental Congress assembled on May 10th. As a fervent supporter of independence, he told the Congress that he would accept the office as a delegate in case a vacancy occurs.
**In early 1776, one of the Rhode Island delegates Samuel Ward became ill with smallpox and was dying. The Rhode Island Legislature held an election to choose his replacement, eventually selecting William Ellery.
**He attended the Second Continental Congress in Philadelphia. He voted in favour of independence on July 2, 1776. On August 2, 1776, he signed the U.S. Declaration of Independence along with most of the other signers.
**After independence, he was placed on the Marine Committee due to his prior experience in shipping. As a member of the Congress, he served on several committees while holding this post.
**In 1778, he on behalf of Rhode Island and Providence Plantations signed the Articles of Confederation, the first constitution of the U.S.
**Due to his vast knowledge, experience and negotiation skills, he was made a member of the Committee to settle diplomatic problems in 1779. He served as a member of the Congress till 1786.
**By 1785, he had gained a reputation for being an abolitionist and wholeheartedly supported Rufus King in his attempts to abolish slavery throughout the U.S.

**He married Ann Remington in 1750. The couple had seven children, of whom five survived to adulthood. Ann died in 1764.
**His second marriage was to Abigail Cary in 1767. With her, he had ten more children, many of whom died in their infancy. His second wife died in 1793.
**He lived a long and fruitful life and spent his retired years in the company of his numerous children and grandchildren. He died of natural causes on 15 February 1820 at the ripe old age of 92.

Ellery remained in Congress for eight years, traveling often from Philadelphia to his home in Rhode Island. Even then, Ellery practiced economy, traveling by horse rather than carriage. One must recall these signers of independence spent long hours away from their families and their businesses. They assumed the cost of the nation’s business as their own.

In 1778, British troops looted and burned his home during the siege of Newport. He and his family escaped to Dighton, Massachusetts, where he restarted his life and business interests. After the war, he held a series of jobs until George Washington appointed Ellery as the custom collector for Newport in 1790, a job he held for the next 30 years.

Signing Their Lives Away tells us, “But his sixteen children helped guarantee that Ellery will live forever. His descendants include William Ellery Channing, the Transcendentalist poet who hobnobbed with Ralph Waldo Emerson and Henry David Thoreau, and the author-abolitionist-attorny Richard Henry Dana Jr. [Two Years Before the Mast]. In 1822, Ellery’s granddaughter Elizabeth Dana Ellery married the son of Theodore Sedgwick, the fifth Speaker of the House of Representatives. Through that marriage, the Ellerys were linked to the Sedgwick clan, so that Edie Sedgwick, the late socialite-actor [Poor Little Rich Girl (1965)] who starred in many of Andy Warhol’s films in the 1960s, and her first cousin, actor Kyra Sedgwick, are also among Ellery’s descendants. And since Kyra Sedgwick is married to actor Kevin Bacon, this makes Ellery (and the rest of the signers0 a link in the popular parlor game ‘Six Degrees of Kevin Bacon.'”