So What Do President Abraham Lincoln and Rock Legend David Crosby Have in Common? William Floyd

Posted on December 17, 2015 by reginajeffers

I am currently writing a novel set in America in the years after the American War for Independence, which means I am immersed in Revolutionary War history and, specifically, in the men who signed the Declaration of Independence and who crafted the nation.

Today, as it is December 17, I chose to bring one William Floyd to your attention, a man whose was born on 17 December 1734.

So you say you know nothing of Floyd. Many at the Second Continental Congress would have agreed with you. For many years, Floyd led a nondescript life, although he was far from poor or from living in dissipation.

From Signers of the Declaration of Independence of U. S. History.org, we learn, “William Floyd was born on Long Island on December 17, 1734. His family had emigrated to America in 1654 and by the time of his birth were well established and wealthy. Though he might have received the best education, his father [Nicoll Floyd] died when he was in his teens, and William was required to take over the operations of the family farm. He was a member of the Suffolk County Militia in the early conflict with Britain. He attained the rank of major general, though at this late date he spent most of his time in the Continental Congress. In 1774 he was chosen to represent New York in the first Continental Congress. He served there through 1776, while his property was destroyed in the Revolutionary War. He acquired land on the banks of the Mohawk river after the war though it would be a few more years till he would retire there. In 1789 he was elected to congress under the new constitution. He served there, acting several times as a presidential elector, until he returned to his native state in 1791. He was called to the service of his state as a Senator in 1803. After serving his term he retired to his true passion, farming. He died in 1821.”

Floyd’s ancestors were Welsh, coming to America in 1680. His education was limited to basic subjects, but he learned much from the society he experienced once he assumed the control of the family estate. Even so, his duties to family weighed heavy on him as he was the eldest of nine. He married Hannah Jones when he was in his twenties an soon his duties to family increased with his own children added to the number for which he was responsible. Although he was known to be civic minded, Floyd did not rush into the “confrontation” boiling between Britain and the colonies. Floyd was of the nature to be wary of severing ties with England, but he cherished his right to govern his interest. He thought England too far removed to understand his life in New York.

Following in his great grandfather’s footsteps, Floyd joined the local militia in 1760. From ColonialHall.com we learn, “At an early period in the controversy between Great Britain and the colonies, the feelings of Mr. Floyd were strongly enlisted in the cause of the latter. He was a friend to the people; and, with zeal and ardor, entered into every measure which seemed calculated to ensure to them their just rights. These sentiments on his part excited a reciprocal confidence on the part of the people, and led to his appointment as a delegate from New-York to the first Continental Congress, which met in Philadelphia on the fifth of September, 1774. In the measures adopted by that body, so justly eulogized by the advocates of freedom, from that day to the present, Mr. Floyd most heartily concurred.

“In the following year, he was again elected a delegate to congress, and continued a member of that body until after the Declaration of American Independence. On that occasion, he assisted in dissolving the political bonds which had united the colonies to the British government; and in consequence of which, they had suffered numberless oppressions for years. Into other measures of congress, Mr. Floyd entered with zeal. He served on numerous important committees, and by his fidelity rendered essential service to the patriotic cause.

“It was the lot of not a few, while thus devoted to the public good, to experience the destructive effects of the war upon their property, or the serious inconveniences arising from it in relation to their families. In both these respects Mr. Floyd suffered severely. While at Philadelphia, attending upon congress, the American troops evacuated Long Island, which was taken possession of by the British army. On this latter event, the family of Mr. Floyd were obliged to flee for safety to Connecticut. His house was occupied by a company of horsemen, which made it the place of their rendezvous during the remainder of the war. Thus, for nearly seven years, Mr. Floyd and his family were refugees from their habitation, nor did he, during this long period, derive any benefit from his landed estate.”

After the First Continental Congress, Floyd led a militia group in defense of their lands against the English at Gardiner’s Bay. At that time, he was named a “major,” a title that followed him throughout life.

During his stint in Congress, Floyd was often accused of being standoffish when he proved to be only shy. He won the other delegates over by volunteering for several committees and working diligently. When it came time to vote for independence, Floyd and the other New York delegates abstained until they received the confirmation of their home delegation. The New Yorkers accepted the Declaration of Independence upon 9 July 1776, and Floyd was the first of his fellow delegates to sign the document on 2 August 1776.

During the war, the British won the Battle of Long Island, and Floyd sent his wife and children across the Long Island Sound to friends in Connecticut for their protection. The English occupied Floyd’s house and supposedly turned it into stable for calvary horses. His livestock went missing and his crops destroyed. Moreover, his beloved Hannah did not survive the war. She died in 1781, a fact that affected Floyd for the remainder of his days. Despite his wife’s loss, Floyd set about restoring the family farm and wealth. 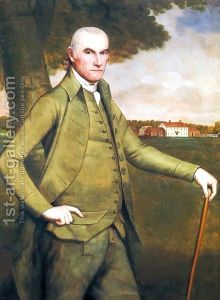 Floyd served in the first House of Representatives and in the Electoral College, but he left politics as age and exhaustion claimed him. Eventually, he moved to his property in upstate New York. At age 69, he turned over the family farm to his son and moved to Westernville, New York, where he lived until age 86, passing 4 August 1821. His descendants include Abraham Lincoln and David Crosby (of Crosby, Stills, Nash & Young fame, as well as a vocalist in The Byrds). [Kiernan, Denise and Joseph D’Agnese, Signing Their Lives Away, Quirk Books, 2009)

3 Responses to So What Do President Abraham Lincoln and Rock Legend David Crosby Have in Common? William Floyd