Posted on September 22, 2015 by reginajeffers

Chivalry of the earlier Anglo-Norman period soon fell into disfavor, and the age of Chaucer was the earmark of society’s evolution from medievalism to modernism. During this period, we find religious heretics, Wycliffe, and the Lollards. The emphasis changed to an age of skepticism and satire as faith and authority lost its hold the people. Feudalism was often found to be corrupt, and its strictures were left to die naturally. 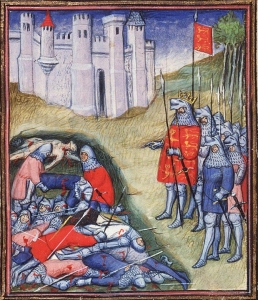 The French lost to the English in August 1346 at the Battle of Crecy in what was the Edwardian phase of the Hundred Years’ War. It was the first of three decisive English successes during the conflict. Edward III led an army of English, Welsh, and allied troops in defeat of Philip VI’s much larger army of French, Genoese, and Majorcan troops. The Battle of Neville’s Cross also proved a British victory in October 1346. The battle took place west of Durham, England. The battle ended with a rout of the Scots and the capture of their king, David II.

Edward III astounded much of Europe with his military prowess, which aroused a sense of patriotism and nationalism in England. This happened even despite the prolonged war with Spain. By the 1370s, the continued wars took its toll on England. John of Gaunt and the Earl of Pembroke suffered severe losses on the Continent, and English continental possessions fell into the hands of its enemies. English towns were sacked. Moreover, the Black Plague spread across England three times in one century.

The heavy loss of life created a shortage of labor, providing the serfs an opportunity to claim their freedom. Demanding a high pride for his expert services, the serf became an important figure in England’s social strata.

1349 saw the passage of law forbidding the increase of wages and the fixing of food prices, but the law’s passage of could not hold off economic exigency, and laborers went wherever they could earn the most money for their work. The peasant class became a nomadic population, and the laborer developed a spirit of independence.

To bring an end to these trends, a law was passed allowing the killing on sight of any laborer who violated the law. A wave of lawlessness resulted, which culminated in the march on London in 1381. The peasants demanded freedom under the inspiration of John Ball, Wat Tyler, and Jack Straw.

From History.com, we find, “During the Peasants’ Revolt, a large mob of English peasants led by Wat Tyler marches into London and begins burning and looting the city. Several government buildings were destroyed, prisoners were released, and a judge was beheaded along with several dozen other leading citizens.

“The Peasants’ Revolt had its origins in a severe manifestation of bubonic plague in the late 1340s, which killed nearly a third of the population of England. The scarcity of labor brought on by the Black Death led to higher wages and a more mobile peasantry. Parliament, however, resisted these changes to its traditional feudal system and passed laws to hold down wages while encouraging landlords to reassert their ancient manorial rights. In 1380, peasant discontent reached a breaking point when Parliament restricted voting rights through an increase of the poll tax, and the Peasants’ Revolt began.

“In Kent, a county in southeast England, the rebels chose Wat Tyler as their leader, and he led his growing “army” toward London, capturing the towns of Maidstone, Rochester, and Canterbury along the way. After he was denied a meeting with King Richard II, he led the rebels into London on June 13, 1381, burning and plundering the city. The next day, the 14-year-old king met with peasant leaders at Mile End and agreed to their demands to abolish serfdom and restrictions on the marketplace. However, fighting continued elsewhere at the same time, and Tyler led a peasant force against the Tower of London, capturing the fortress and executing the archbishop of Canterbury.”

Richard II promised to make concessions,but when the peasants dispersed and massacred Flemings for good measure, the leaders were taken into custody and prosecuted at the bloody assizes. Richard II withdrew his concessions.

Wealth was unevenly distributed, and class hatred formed deep roots. The nobles and rich merchants practiced extravagance and the use of public offices for selfish rewards. Even the Church was full of abuses. In 1382, there were two Popes and begging friars infested the land. The summoners of the ecclesiastical courts blackmailed people to increase their wealth.

A spirit of reform produced satirical literature. John Wycliffe preached for “intellectual freedom,” but the authorities persecuted him, and the Wars of the Roses finally checked the growing reform. Chaucer and his contemporaries reflect the corruption of institutions and the instability of the age in their works. 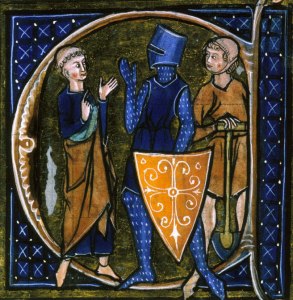 Even so, some progress was made. Parliament became a two-house body in the 14th Century. In it, the three estates were represented and given a voice in the choosing of ministers. “The estates of the realm were the broad social orders of the hierarchically conceived society, recognised in the Middle Ages and Early Modern period in Christian Europe. There was no single system of dividing society into estates, and systems developed over time. The best known system is the French three-estate system that was used until the French Revolution: the clergy (first estate), the nobility (second estate), and commoners (third estate). The two-estate system which eventually evolved in England was to combine nobility and bishops into one lordly estate, with ‘commons’ as the other estate, the two-estate system which produced the two houses of parliament.” (Estates of the Realm)

In the wool trade, England became the foremost country, and laws were created to encourage domestic manufacture. Even the disposition of Richard I, which brought Henry of Lancaster (Henry IV) to the throne brought to England an era of constitutional development.

Henry IV faced turmoil upon his accession to the throne. The Welsh and Scots were in revolt, but he managed to subdue both groups. When Henry V cmd to the throne, the wars with the French resumed.

After winning a battle at Agincourt (1415) and making an advantageous  treaty at Troyes (1420), the conquest of France and its attendant hardships laid him low. He died in 1422. The new government continued the war against France. The siege of Orleans was raised by Joan of Arc, but she was taken, and Henry VI was crowned king of France. His reign was a critical one in England’s history. This was the period of Cade’s rebellion.

Richard of York laid claim to the crown, and the wars in France were going against the invaders. When the Hundred Years’ War came to an end in 1453, England kept only Calais of all its French conquests. In this year, Richard seized the government, and the Wars of the Roses began. Initially the Yorkists knew defeat, but they returned in 1460, only to be beaten at the Battle of Wakefield. Richard met his death, but his followers continued the struggle. At length, Richard’s son, Edward, became Edward IV (1461).

Even so, the wars continued. A Lancastrian uprising forced Edward IV to flee to France, only to return again and reestablish his supremacy until his death in 1483. His heir was only twelve years old, so Richard of Glouscester was named Protector of the realm. But Richard was ambitious for the crown so he had the heir and his brother imprisoned in the tower and eventually killed so he could be proclaimed King. The country did not favor the move, and he was deposed by the forces of Henry Tudor at the Battle of Bosworth in 1485. (History of English Literature: Part I – Early Saxon Through Milton, Hymarx Outline Series, Boston, Mass.) 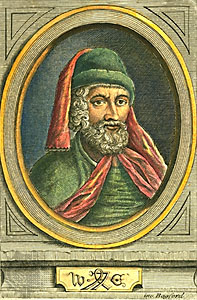 Henry VII became King and brought peace and stability to England. He rid the kingdom of its other pretenders. he reduced the number of nobles and made the Church dependent upon the Crown. Not all was well during Henry Tudor’s reign: agriculture was still quite backward in its views and methods. Labor was not easily had. Disease and famine took many lives, and the working class knew poverty. The nobles were highly in debt. Only the middle class knew any stability. They were moving toward a new materialistic aristocracy. Their actions were supported by governmental ordinances. Yet, the greatest of the events during this period was the introduction of printing to England by William Caxton in 1476.